The Black Fox is an audacious jewel thief who has had a long criminal career in the United States and in Europe.

His crimes have brought him repeatedly into conflict with the hero Spider-Man.[5]

He also trained both Walter and Felicia Hardy, the Black Cat.[2] 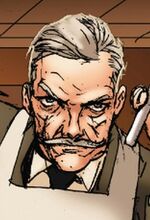 He tried to escape Spider-Man by moving to Los Angeles, where he occupied the mansion of a rich couple while they were on vacation in Switzerland. Unfortunately Peter Parker, aka Spider-Man, was in Los Angeles at the same time for a book signing event and defeated him again, although he showed mercy and let the Black Fox avoid prison.[6]

Spider-Man finally recognized that he had a soft spot for older men due to his memories of Uncle Ben, and that was why he repeatedly let the Black Fox go. Resolving these issues, he captured and incarcerated Black Fox.[7]

Black Fox later anonymously hired Black Cat to steal a painting from the Frick Collection, then came to her in her hideout, evading all her security measures.[2]

The Black Fox is a highly skilled trained athlete. Although thanks to his advanced age he is no longer as proficient as he would have been when young, he is still incredibly agile. He can for instance swing on a line from one building to another, and scale the sides of buildings.

Black Fox possesses the normal human strength of a man his age, height, and build who engages in intensive regular exercise.

Black Fox is rather cowardly,[citation needed] and apparently has little training in hand-to-hand combat.

Black Fox carries a pack containing smoke grenades and flash grenades. He also carries rope for swinging between buildings, a glass cutter, and an electronic device that can disable most burglar alarms.