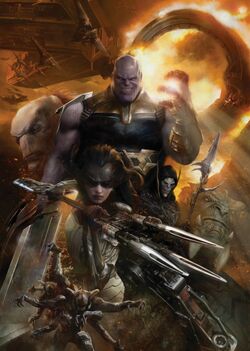 Allies
Chitauri, Korath, The Other, Outriders, Ronan the Accuser

The members of Black Order were children adopted by Thanos and raised to become ruthless warriors. Collectively and individually, they act as Thanos' emissaries and lieutenants throughout the galaxy, and assisted him in his goal to gather the Infinity Stones to bring balance.[1][2]

To destroy Xandar, the Kree zealot Ronan the Accuser sought out the assistance of Thanos and his Black Order. Thanos agreed to destroy Xandar if Ronan could obtain the Orb. To ensure Ronan's success, Thanos lend him Gamora and Nebula. However, both daughters betrayed Thanos with Gamora joining the Guardians of the Galaxy to protect the Orb and Nebula defecting to pursue her own plans of murdering Thanos.[1]

Ebony Maw and Cull Obsidian went after the Time Stone in Manhattan and confronted its guardian, Doctor Strange, as well as Wong, Iron Man, Bruce Banner, and Spider-Man. Cull Obsidian was dealt with after Wong teleported him to one of the poles, severing off his arm in the process. Ebony Maw managed to incapacitate Strange and boarded on the Q-Ship to return to Titan. However, Iron Man and Spider-Man had stowed away on the ship. They interrupted Ebony Maw when he was torturing Strange for the Time Stone. Iron Man blasted the ship's hull, pulling Maw into the vacuum of space. In the meantime, Proxima Midnight and Corvus Glaive had attacked the bearer of the Mind Stone, Vision, in Scotland. They were forced to retreat by Steve Rogers, Black Widow and Falcon, Corvus Glaive was injured by Black Widow but survived.[2]

After the Avengers took Vision to Wakanda, Proxima Midnight and Cull Obsidian led an army of Outriders in an assault against the small nation before Corvus Glaive joined the siege. Proxima Midnight was killed after Wanda Maximoff launched her into one of her army's own vehicles and she was mauled. Cull Obsidian confronted Bruce Banner, who was wearing the Hulkbuster Armor. In the middle of the fight, Banner fastened one of the gauntlets of the armor into the creature's missing arm and sent him into the air. He quickly reached the near-impenetrable energy dome surrounding Wakanda, causing him to scrape the barrier until exploding. When Corvus Glaive was overpowering Steve Rogers in combat, Vision stabbed him with his own spear, killing him.[2]

Retrieved from "https://marvel.fandom.com/wiki/Black_Order_(Earth-199999)?oldid=5467204"
Community content is available under CC-BY-SA unless otherwise noted.