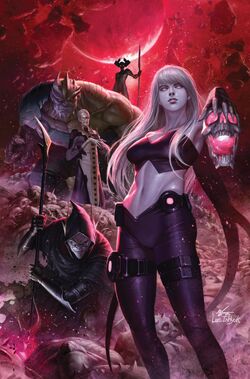 Editorial Names
The Warmasters of Thanos[1]

The Black Order is a group of lethal aliens gathered by Thanos to serve as his generals in his war against life.[8]

The first servant of Thanos to be made a member of the dreadful Black Order was his favorite one, Corvus Glaive.[9] He was later joined by the Butcher Squadron survivors Ebony Maw and Proxima Midnight,[10] as well as his brother Black Dwarf and Supergiant.[11] At some point, the Black Order served Thanos against Ego the Living Planet, whose very existence was an offense to Death, and thus to Thanos as well. Their battle ultimately ended in a stalemate.[12]

Years later, after learning the Avengers left the Earth unguarded to battle the Builders in space, Thanos assembled his Black Order once more to invade the planet.[11] By analyzing the memories of an Outrider previously sent to Earth to uncover its secrets, Thanos learned that most of the Infinity Gems were lost by the Illuminati, so he sent the Black Order after the remaining one: the Time Gem.[3]

The Black Order landed in different points of the world in order to confront the Illuminati[13] and discover the Time Gem's location. In New York City, Ebony Maw was able to take control of Doctor Strange, making him help to find what Thanos was seeking. In Wakanda, Black Dwarf and his army were defeated by the Black Panther. In Atlantis, Proxima Midnight convinced Namor to tell her where the Time Gem was. At the Jean Grey School for Higher Learning, Corvus Glaive and Supergiant faced the X-Men but left upon realizing there was no Infinity Gem there.

Namor told Proxima Midnight that the Time Gem was in Wakanda,[3] prompting the Black Order to quickly seize the country at a later point. In the Necropolis, they found the Illuminati's antimatter bombs.[14] Meanwhile, Ebony Maw located the other thing Thanos was looking for on Earth: his son, Thane.[15] The Black Order (minus Supergiant) departed to Greenland, Ebony Maw's location, for Thanos to kill his son. Following his defeat at the hands of the Black Panther, Black Dwarf was left to guard The Peak as it was discovered the Avengers were returning to Earth.[16]

Black Dwarf was killed when the Avengers regained control over The Peak; Supergiant was killed when the antimatter bombs she activated were transported along with her by Lockjaw, an Inhuman dog ally of the Illuminati, to a distant uninhabited planet; Corvus Glaive was killed by Hyperion when the Avengers arrived in Greenland in order to confront Thanos; and finally, Ebony Maw double-crossed Thanos and freed Thane to let him fight his father, prompting Thane to trap Thanos, Proxima Midnight, and Corvus' Glaive in an amber construct which left them in a state of "living death."[17] The remaining members of the Black Order (a resurrected Corvus Glaive and Proxima Midnight) and Thanos later joined the Cabal to aid Namor in countering the incursions.[18]

After doing away with Corvus Glaive's incarnation of the Black Order,[19] Thanos assembled his second Black Order with Proxima Midnight and fellow Cabal member Black Swan.[20] While imprisoned below the Triskelion, Thanos was approached by Hela. She wanted his support and in exchange would give him a Mjolnir from an alternate reality as tribute.[21] Thanos accepted the deal, and sent Proxima and Black Swan to aid Hela in retrieving the hammer from the Collector's ship.[22] After the Black Order was forced to return empty-handed, Hela killed Proxima Midnight to prove her power to Thanos.[23]

In preparation for contest against the Grandmaster, the Challenger reformed the Black Order, bringing back its deceased members in the process.[24] They were set to face the Grandmaster's own team, the Lethal Legion, as part of a competition that took place on Earth.[25] As soon as the competing teams were teleported to the battleground to survey it, they broke into battle. Their masters cut their fight short since the contest hadn't started yet. Before the first round, the Black Order blew up the Avengers Mansion while the entire team was assembled there to prevent the heroes from becoming an obstacle.[26] The heroes survived, as they were teleported to safety at the nick of time by Voyager.

Once the game started, both teams were divided in half to confront each other for the possession of the two Pyramoids placed by their masters. Supergiant, Black Dwarf and Black Swan were pitted against the Blood Brothers, Mentacle and Metal Master in Rome, while Ebony Maw, Proxima Midnight and Corvus Glaive confronted Captain Glory, Drall and Ferene the Other in Cusco. Both confrontations were intercepted by the Avengers.[25] The Black Order scored a point when Black Dwarf secured the Pyramoid in Rome, though he was teleported to the Grandmaster's Cosmic Game Room in such a manner it seemed like he had been disintegrated.[27] The round ended after the Pyramoid in Cusco was touched by the Avenger Human Torch, so both competing teams left to regroup and prepare.[28]

For the second round, the Black Order traveled to Antarctica to seize one of the two new Pyramoids. They were met by the Avengers and outpowered. Ebony Maw was knocked out by Voyager, Corvus Glaive was killed by Rogue and Supergiant was ambushed and killed through dissipation by the Lethal Legion's Ferene.[29] These loses forced the only remaining members of the Black Order on their feet, Proxima Midnight and Black Swan, to retreat while Ferene claimed the Pyramoid.[24] During the contest's final round, the last Pyramoid was teleported from its designated location to the Avengers Auxiliary Headquarters by the Grandmaster's secret agent, Voyager.[30] Proxima Midnight and Black Swan followed the Challenger's own ace in the hole, the Hulk, to the Pyramoid's new location,[31] but were defeated by the heroes left in the wake of Hulk's rampage.[32]

Following the victory of the Avengers, the Black Order minus Supergiant regrouped and escaped to the planet Angargal, where they were approached by the Grandmaster with an offer:[33] to bring down the Sinnarian Empire by destabilizing the worlds under its rule. Thinking this would be a worthy challenge, the Black Order accepted. They were apprehended days after initiating their mission and put in jail to await their execution. The Resistance later broke the Black Order out of prison because of their shared goal and informed them about the Bow of Gabriel, a cosmic weapon of the empire capable of bringing entire planets to heel in a matter of hours. Wanting to restore the Black Quadrant to its former glory and expand its reach to the entire universe, the Black Order started planning a way to steal the weapon instead of destroying it like the Resistance wanted.[34]

After the location of the rebel base was compromised by a spy, the rebel leader Peacemaker sent the Black Order to intercept a ship transporting an ultra-rare metal called Onducium, which was needed to forge the arrows for the bow. Despite the attack of a mind-controlled Nova, they were able to secure the metal. Maw revealed himself to be the spy by disappearing soon after revealing the location of the new rebel base to Emperor Attican, resulting in the capture of Peacemaker.[20] Corvus then became the Resistance's new leader and launched an attack on the empire. Meanwhile, Maw manipulated Attican into lowering Sinnar's defenses, giving him the opportunity to steal the bow and reunite with the rest of his team. Corvus used the bow to turn everyone present, except for the Black Order, into twisted monsters. With their task complete, the Grandmaster arrived and explained he had bet with the emperor that his empire based on fear could be brought down by only five individuals. Having finally won his bet, he claimed the bow and left the Black Order to their next business.[2]

Later, the Black Order was recruited by the Asgardian death goddess Hela to recover the body of Thanos so she could resurrect him. Thanos' body was in the possession of Thanos' Starfox who brought it with him to a meeting attended by major figures from across the universe to discuss Thanos' will. The group crashed the meeting using the space station Knowhere and a horde of Outriders. They successfully retrieved Thanos' body and dealt with the meeting's attendees by trapping them in an artificial rip in space. However, Thanos' head was missing, which prevented Hela from resurrecting him until it was recovered.[7]

When the Dark Guardians captured Gamora for believing that she was Thanos' means of resurrection, Hela and the Black Order took them out to prevent her execution. However, Hela revealed that she and Thanos had planned for his resurrection for a while and that Gamora wasn't to be Thanos' vessel, Starfox was. After that, Thanos' consciousness took over Starfox's body and left with Hela and the Black Order for Knowhere, where his restored body was being kept for his resurrection.[36]

To stop Thanos' resurrection, the Guardians and remaining Dark Guardians attacked Knowhere. Gladiator, Beta Ray Bill, Nova, and Captain Marvel (Phyla-Vell) subdued the Black Order while Gamora killed Starfox to stop Thanos' resurrection, but Thanos came back with a broken mind. Then Thanos was hit by a missile fired by Hela that generated a black hole, sucking up the two partners and all of Knowhere. The Guardians and Dark Guardians were able to escape.[37]

Having somehow escaped the black hole, the Black Order went into hiding on Earth to reflect on independence, while realising they have become a family.[38] Disguised as humans, they took up residence on East Village. While Corvus was away, Proxima Midnight ended up discovering the Reality Stone bonded to Ripley Ryan, a former reporter who attempted to steal the powers of Captain Marvel (Carol Danvers), and alerted her teammates about it. Despite Black Swan not wanting to have anything to do with an Infinity Stone, it was ultimately decided that they would go after the Reality Stone when Corvus returned.[34]

Tired of being a slave to the Infinity Stones or to those who wield them, Black Swan got to Ripley first and subdued her. She forced Ripley to accept a mysterious device of hers and to use the Reality Stone to speak and understand Swedish. She left as soon as Captain Marvel arrived, promising to return later.[39] When the Black Order attacked them again Star tried to use the device, but she accidentally used it on Corvus trapping him inside it. After Scarlet Witch arrived Star used her powers to communicate with the Black Order and arranged a bargain, she would give back Corvus to them and in turn they would let her go. They agreed and after Star got rid of the Scarlet Witch and Captain Marvel gave the trapped Corvus back to them before she left.[38]

Retrieved from "https://marvel.fandom.com/wiki/Black_Order_(Earth-616)?oldid=5794016"
Community content is available under CC-BY-SA unless otherwise noted.