View source
watch 01:39
Hawkeye Is Here To Amaze - The Loop
Do you like this video?
Play Sound
Spoiler Warning!
This page may contain spoilers with plot and/or ending details about stories which have been only recently published or broadcast.
Please see our spoiler policy for our rules governing articles about such subjects.

Appearing in "The Long Shadow - Book One"

Synopsis for "The Long Shadow - Book One"

Academy Award-winning writer John Ridley and Stormbreaker artist Juann Cabal launch an all-new BLACK PANTHER series with an action-packed espionage story that will upend everything in T'Challa's life and have ramifications for the entire Marvel Universe!

Secrets from T'Challa's past have come back to haunt him! Fresh from returning from his travels in space, Black Panther receives an unexpected and urgent message from a Wakandan secret agent! Now T'Challa must race the clock not only to save his agent, but also to keep his true agenda under wraps. Because if the truth comes out, it could cost T'Challa everything… 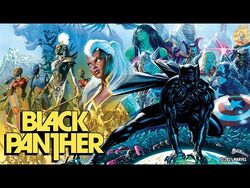