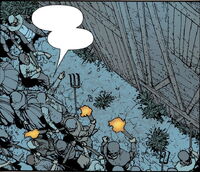 The Black Plague[4][5] (also known as Black Death)[1] was a plague epidemic that annihilated half of Europe,[4] from Great Britain[6] to Kazakhstan[5]

Many unrelated origins have been given as explanations for the Black Plague:

When the villagers torched his house, Dafydd used his aerokinetic powers to stop the flames, only propagating them to the rest of the village.[6]

Around the same period, in Crimea, the Proto-Mutants who lived as a tribe apart from the local humans were immune to the Black Plague. As the humans spotted that immunity, their fear and anger grew. They captured and killed Proto-Mutant Ister's sister, possibly drinking her blood, seeking for a cure.[1]

The Proto-Mutants retreated further into the hills but were slaughtered by the humans and buried in a mass grave near Kuryk, Kazakhstan, off the Caspian Sea.[1]

Before winter 1374, Albert Destine attempted to use his healing power to stem the Plague, having greatly suffered from it (causing his father Adam and his brother Thaddeus to escort him to the Shalu Monastery in Shigatse).[2]

Black Axe battled the undead in Europe during the Black Death.[8]

The Inhuman corporation Ennilux was instrumental into ensuring that mankind survived the Black Plague.[9]

Helene and Flavius of the Cat People, guilty over the release of the plague attempted to find a cure. In their old age they was successful saving the human race.[10]

The Proto-Mutant mass grave was later dug up by Dr. David Michael Gray, who hired another scientist to harvest and weaponize the plague. This led to the discovery of the Proto-Mutants.[5]

If their numbers hadn't been culled because the cats were (allegedly) in league with the Devil, they might have prevented the Bubonic Plague in Europe.[3]

Retrieved from "https://marvel.fandom.com/wiki/Black_Plague_(Event)?oldid=5605761"
Community content is available under CC-BY-SA unless otherwise noted.