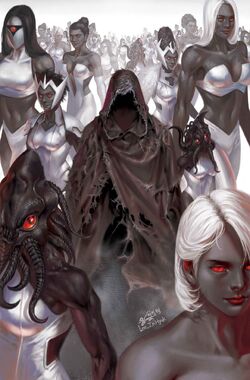 Base of Operations
Library of Worlds; Multiverse
Affiliations

The Black Swans were the disciples of Doctor Doom, who had formed a religion around his identity as Rabum Alal. The Swans were used as his pawns to fulfill his mission of destruction of every Molecule Men across the Multiverse to oppose the plans of the Beyonders.[1]

The Black Swans operated out of a Library of Worlds created by the Ivory Kings. Reed Richards once noted this library existed outside the observable Multiverse.[2]

A group of Black Swans rebelled against Doom. Searching a different path, they destroyed other Earths during incursions as an offering to Rabum Alal and to buy more time for other universes (for every Earth destroyed during an incursion two universes and the Earth of one of them were saved).[1]

During the attack of Doctor Strange, leader of the Black Priests, it was revealed that Rabum Alal was actually Doctor Doom, who was trying to find a way to stop the Ivory Kings, the destroyers of the Multiverse.[3]

The fate of the Black Swans is unknown following the creation[4] and destruction of Doom's Battleworld and the restoration of the Multiverse by Mister Fantastic of Earth-616.[5]

Retrieved from "https://marvel.fandom.com/wiki/Black_Swans_(Multiverse)?oldid=5545289"
Community content is available under CC-BY-SA unless otherwise noted.