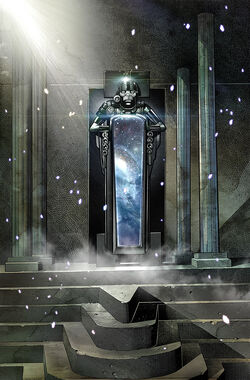 The Vortex elevates you to a cosmic entity. But there is no accounting for what it does to your heart.

The Black Vortex was created by the Celestial Godhead, after a Viscardi named Gara expressed to the cosmic being the desire of their species to explore beyond their potential. Gara was the first of the Viscardi to submit to the Black Vortex's power. One year later, a war between the Viscardi left Gara as the sole survivor of her species.[1]

Twelve billion years later, the Black Vortex was located on the planet Kymellia III. After discovering its location,[2] Mister Knife sent his crew, the Slaughter Squad, to Kymellia III to steal it from the Kymellians.[3]

Mister Knife's son Star-Lord and his girlfriend Kitty Pryde stole the Black Vortex from Knife in order to ruin his plans, and ended up asking the X-Men and the Guardians of the Galaxy's help to see what to do with it.

Mister Knife's Slaughter Lords tracked down Star-Lord and fought with the heroes for its possession.[1]

Gamora and Beast used the Black Vortex to acquire cosmic powers, and Gamora later showed the X-Men and Guardians of the Galaxy what they would look like with its powers.[4]

After unleashing his cosmic potential, Angel allied himself with Gamora and Beast to bring peace to the universe by using the Black Vortex.[5] They took it to a primitive planet where they planned to use it to enhance its inhabitants, but they were attacked by Ronan who took the Black Vortex from them.

The Kree took the Vortex to Hala. The planet was shortly after assaulted by the cosmically empowered heroes.[6] A fraction of the Guardians and the X-Men arrived to Hala to assist the Kree, and Star-Lord helped Ronan seize the Black Vortex from the Supreme Intelligence in order to acquire its powers against his master's will.[7] After Gamora, Beast and Angel were forced to retreat, the Guardians and the X-Men tried to convince the Supreme Intelligence to let them use the Vortex to no avail. The heroes proceeded to attack the Accuser Corps and Nova fled with the Vortex. However, during that conflict Mister Knife and the Slaughter Lords attacked Hala. Misa of the Slaughter Lords attempted to take the Vortex from Nova, but after Hala was destroyed by Knife's flying fortress, it was left floating in the void and remains of the planet.[8]

Nova reacquired the Vortex, and as the Guardians and the X-Men had been forced to flee from Hala while it was exploding, decided to take it to Earth to seek for help with the Avengers. Nova hid the Vortex in his apartment, until the Collector appeared before his door, with intentions of purchasing the Vortex. Nova went on the run again, and decided to take the Vortex to Spartax, where the Guardians and the X-Men had first met. However, Nova accidentally arrived to Mister Knife's fortress, and the Vortex was seized from him by Knife's and his ally Thane, who proceeded to empower himself with it.[9] The Vortex was subsequently kept in Knife's fortress, after being used on Thane to encase the entirety of Spartax in an amber construct.[10]

When Cyclops, Iceman and Groot escaped imprisonment in Knife's fortress, they came across the Vortex, empowered themselves to escape and took it with them. Cyclops handed over the Vortex to Captain Marvel, who was going to deliver it to Kitty Pryde for a plan they had.[11] As she was en route to Spartax, Captain Marvel was intercepted by Gara, who had been for the past thousands of years in a mission to find and destroy the Vortex.[12] Captain Marvel was still able to deliver the Vortex to the heroes in Spartax, but Gara soon caught up with her. Gara interrupted the heroes when they were discussing how to proceed, and recovered the Vortex. The X-Man Magik convinced her to let one of them use the Vortex for a last time, and Kitty Pryde decided to be that person.[5]

After Kitty used her augmented phasing powers to save Spartax, Gara was given the Vortex. Before leaving with it to guard it, as it couldn't be destroyed, she allowed whoever wanted to use the Vortex to get rid of their cosmic powers. Finally, Gara rested at the center of a star, guarding the Black Vortex in her arms.[13]

The Black Vortex acts like a mirror which shows an individual what would they look like with their cosmic potential unleashed. After saying "I submit to the Black Vortex," the individual will be given the power promised.[1] The Vortex also appears to possess some kind of sentience, being able to show visions of a future in which he submitted to its power to Nova, once he asked why would he submit to its power.[9]

The Vortex is also capable of reverting the state of its users, taking their cosmic powers from them. However, mental or physical side-effects might remain. For example, Iceman gained the ability to turn his entire body into organic ice, and Groot suffered a slight change of appearance.[13]

The enhancements provided by the Black Vortex diminish both over time and with exertion.[14]

Like this? Let us know!
Retrieved from "https://marvel.fandom.com/wiki/Black_Vortex?oldid=6437625"
Community content is available under CC-BY-SA unless otherwise noted.