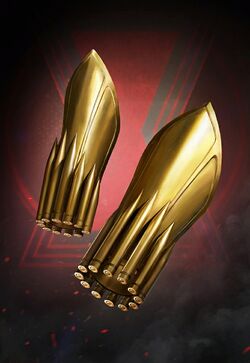 The gauntlets were later improved upon by the Widow when she had a sudden inspiration to try and find a way to combine Spider-Man's powers with her own abilities. She decided to abandon her old costume and design a new one, as part of her "rebirth." The newly designed gauntlets were described as shooting ropes and venom-sting bracelets.[2]

It has been stated by Natasha that at times each gauntlet has weighed four kilos, leading her to almost blow her own hand off on one occasion and that the parts were difficult to replace especially while in the field.[3]

The current gauntlets and the equipment it contains are upgraded and maintained by S.H.I.E.L.D. and the Widow, by being the owner, herself. Natalia Romanoff uses a number of special equipment contained in her gauntlets:

Black Widow's uses prototype gauntlets with electrical weapons, created by S.H.I.E.L.D.'s Tech Directorate, that can deliver powerful shocks from two shaped bracelets for the Black Widow. They light up with blue lines when activated and allow their wielder to electrocute their enemy on contact.[4]

Retrieved from "https://marvel.fandom.com/wiki/Black_Widow%27s_Gauntlets?oldid=5819264"
Community content is available under CC-BY-SA unless otherwise noted.