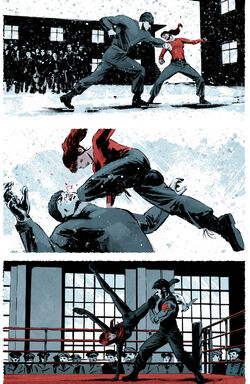 The Black Widow Ops Program (Программа спец-отряда "Черная Вдова") was one of the Department X's espionage training programs, which plays a critical role in Natalia Romanova's life. Based at the Red Room facility, it had been a Cold War program to train the deadliest female spy in the world. It was created due to the success of their previous sleeper agent and assassin, the Winter Soldier.[1]

The Black Widow Ops Program wasn't simply a training but employed biochemical enhancements for its agents and also implanted them with false memories reminiscent of those used by the Weapon Plus Progam.[1] Department X recruited 28 little orphan girls to make them undetectable deep-cover agents to infiltrate China and the West. The core methodology was designed by Professor Grigor Pchelintsov, a leader in the field of psychotechnics, and allowed for imprinting people with almost completely fabricated memories.[1] They were made to believe that they were trained in ballet in the Bolshoi Theatre.[2][3][4] During her training, Romanova was contacted by the Enchantress, who manipulated her simply for the sake of it suggesting that Romanova may be freed only to prevent her from escaping - however, Romanova's effort attracted attention of the program's organizers, who would had otherwise "discard" Romanova.[5] Natasha was placed with a handler, Ivan Petrovitch.

Furthermore, the girls all received a special treatment designed by Dr. Lyudmila Kudrin, a biochemist. The Kudrin treatment could make women stay young for many decades, as well as superhumanly healthy and resilient.[4]

Niko Constantin was the only male trainee of the Red Room's male equivalent dubbed "Wolf Spider", Niko Constantin proved to be an effective killer, but impossible to handle or control, leading to the program to be declared a failure. Years later, he was found to be imprisoned in a Russian gulag, leading a gang of convicts dubbed the Wolf Spiders, and holding a grudge against James "Bucky" Barnes, one of the trainers for the Wolf Spider program.[6]

The K.G.B. continued the Black Widow Ops Program at the Red Room in the late 1970's. The new Black Widow program was making a reality out of the disinformation, thus helping hide what the real project had been. This Red Room program successfully trained their agent, Yelena Belova, though she soon left the service.[7]

Natasha, weary of espionage and adventure, retired to Arizona but was targeted, as were the other Black Widow subjects of the Red Room, by the North Institute on behalf of the corporation Gynacon. Natasha’s investigations led her back to Russia, where she was appalled to learn the previously unimagined extent of her past manipulation, and she discovered the Widows were being hunted because Gynacon, having purchased Russian biotechnology from Red Room’s successor agency 2R, wanted all prior users of the technology dead. After killing Gynacon CEO Ian McMasters, she clashed with operatives of multiple governments to help Sally Anne Carter, a girl Natasha had befriended in her investigations, whom she rescued with help from Daredevil and Yelena Belova.[8]

The Red Room was the site of mass killings of K.G.B recruits. Surveillance video reveals the killings are carried out by the Dark Ocean Society lead by a new Ronin.[9] However before their investigation is completed the group is attacked by the Supreme Soviets and are forced to split up.[10] Hawkeye and Black Widow travel to Sapporo, Japan, the base of operations of the Dark Ocean Society and Mockingbird and Dominic Fortune head to the tip of the Kamchatka Peninsula following mass Russian troop movements.[11] The group reunites on the disputed Kuril Islands and discover that the identity of the new Ronin is Alexi Shostakov, the original Red Guardian and Black Widow's ex-husband. Shostakov revealed he intended to force a war between Russia and Japan that will restore Russia's former glory. A battle ensues as the heroes take on a combination of the Dark Ocean Society and the Supreme Soviets. During the battle Hawkeye receives a critical blow to the head, Widow however manages to take down Shostakov with the help of Fantasma.[12]

The Red Room was reformed years later, and an American branch overseen by Alexander Cady[13] was established in Westchester County, New York.[14] In addition to continuing the original Red Room training program, this base delved into a cloning program with the objective to have at its disposal exact replicas of their best agents. A clone of Natasha Romanoff was created shortly after her death at the hands of Captain America. Even though her handler Cady intended her only to possess memories related to her service at the Red Room, Ursa Major secretly interfered in the process that was supposed to give her only a selected few of the original Natasha Romanoff's memories.

The clone went on to target the remnants of both Hydra and S.H.I.E.L.D., while keeping a secret the fact that she remembered the entire life of her past self. Black Widow eventually investigated the Red Room and found out about the cloning program and that she was a clone herself. Natasha started working against her handlers after Ursa Major urged her to destroy the Red Room and put an end to their operations. After faking the death of one of her targets, ex-S.H.I.E.L.D. agent Sally Blevins, Natasha killed Alexander Cady and pinned his murder on the Winter Soldier to throw her superiors for a loop.[13]

After seemingly disposing of the Winter Soldier and his ally Hawkeye, Natasha rose up to the rank of commander, though she used her influence on the recruits to secretly turn them against their masters. Black Widow was forced to reveal her true intentions after Bucky and Clint tracked her down to the base. She killed her comrades, liberated the recruits and put an end to the cloning program. The base was detonated after Black Widow's coup was reported, and she set out to continue her endavor to end the Red Room.[14]

Like this? Let us know!
Retrieved from "https://marvel.fandom.com/wiki/Black_Widow_Ops_Program_(Earth-616)?oldid=6046883"
Community content is available under CC-BY-SA unless otherwise noted.