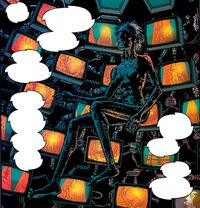 The Black Womb Project was a secret project funded by the United States Government and based at a nuclear facility in Alamogordo, New Mexico. It was created to research genetics and mutation. Both Brian Xavier (father of Charles Xavier) and Kurt Marko (father of Cain Marko) were members of the Project and allowed its head, Dr. Nathan Milbury (Mister Sinister) to perform experiments on their sons. The Project also experimented on thousands of mutant babies, including Toad (Mortimer Toynbee).

Retrieved from "https://marvel.fandom.com/wiki/Black_Womb_Project_(Earth-616)?oldid=5638765"
Community content is available under CC-BY-SA unless otherwise noted.