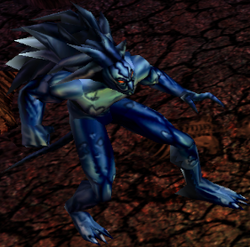 Blackheart was the evil shape-shifting son of Mephisto created out of negative energy generated by violent crimes that occurred in the same spot over a period of centuries and taken in as a protege by Mephisto. He was one of the demons fought in Mephisto's Realm.

He first appeared attacking Jean Grey mentally. Using some type of mechanisms, Blackheart was fought by the Ultimate Alliance until his machines were destroyed. After being defeated, Blackheart gave up a type of key which released either Jean Grey or Nightcrawler.[1] Blackheart was never seen again.

Seemingly those of Blackheart of Earth-616.

Seemingly those of Blackheart of Earth-616.

Although he is immortal like his father, Blackheart is never seen again.

Like this? Let us know!
Retrieved from "https://marvel.fandom.com/wiki/Blackheart_(Earth-6109)?oldid=6057841"
Community content is available under CC-BY-SA unless otherwise noted.