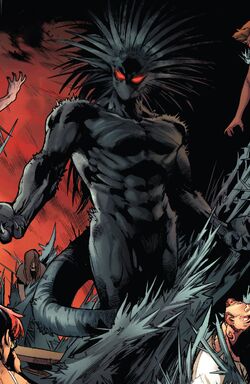 Mephisto, have you ever stopped to wonder just what it is you are doing in Hell? Or as you call it, the Netherworld? This is the realm of the accursed! Why do you think you are here?

Centuries of murder in a locale named Christ's Crown, in New York, drew the attention of the demon-lord Mephisto, who used the energy of the accumulated evil there to create a "son," Blackheart. Blackheart explored the nature of evil under his father's tutelage, clashing with and failing to corrupt Daredevil and Spider-Man.[9] Mephisto and Blackheart once tormented Daredevil, Brandy Ash, the genetically engineered Number Nine, and the Inhumans Gorgon, Karnak,[10] and Ahura,[11] manipulating their emotions and tricking them. They were soon drawn into Hell for worse torments.[12] Brandy Ash did not survive.[13]

In an attempt to be free of captivity, Blackheart made contact with Misha, from the group Warheads, and became the source of her precognitive visions. Eventually Misha's squad, the Kether Troop, invaded Hell itself and freed Blackheart, who was temporarily in the disguise of Doctor Strange.[14]

Mephisto sent Blackheart to Earth with his powers diminished to make him learn humility. Blackheart returned to Christ's Crown and lured the Ghost Rider, the Punisher, and Wolverine to the town in an attempt to corrupt them. The group eventually followed Blackheart back into his own realm for a final confrontation.[1] He would once again attempt to commission their services, using them to help him finally destroy Mephisto and take over his portion of Hell.[8]

Alongside the Grim Reaper, Blackheart brought Wonder Man to Mephisto's Realm to fight his father.[15]

He was later seen alive and attending a meeting with Mephisto, Satannish, Hela, and Dormammu about a disturbance created by the newly resurrected Magik, who was looking for the Soulsword and the original Bloodstone amulet. Belasco's daughter, Witchfire, appeared during the meeting and revealed herself as the current owner of the original amulet and vowd to take her father's place as ruler of Limbo and seat at their table.[17]

After being cast out of Hell and left powerless on Earth by Mephisto, Blackheart and his partner, the gargoyle Gari Oyle, began plotting a way to bring Hell to Earth so Blackheart could overthrow his father. To accomplish that, they needed to perform a ritual that required, among other things, one hundred human souls signed over of their own volition. Therefore, they disguised themselves as humans and opened a casino in Las Vegas named "The Devil's Den," intending to make those who would be in debt to it give their own souls as payment.[6]

Expecting his father to try and harm them, Blackheart killed Pat Mulligan to acquire the Toxin symbiote and purchased a vial of X-23's blood to create a set of symbiote-clad clones to protect him: the Symbiote Warriors. The Toxin symbiote was later stolen by Venom and Jack O'Lantern at the Crime-Master's behest, but Blackheart had already secured a piece of its flesh to use in the ritual by then.[18]

With all the ingredients at hand, Blackheart and Gari Oyle initiated the ritual and tricked the unexperienced new Ghost Rider, Alejandra, into powering the Hell Centrifuge they had built. A doorway opened and Hell started to spread through Las Vegas; however, Johnny Blaze left a magical amulet at the city limits that halted the expansion. Ghost Rider then joined forces with Venom, Red Hulk, and X-23 to stop Blackheart. Upon being confronted by the four heroes, Blackheart used the H'elian's Mirror Cauldron to create Antitheses of them.[6] Both the heroes and their Antitheses died in battle,[19] but Mephisto gave the fallen heroes a second chance at life in order to stop his son.[20]

Following Alejandra's death, Gari Oyle captured Zarathos and delivered it to Blackheart. He wanted to bond with the Spirit of Vengeance[21] and use the power he would gain to destroy his father,[22] but Red Hulk and Venom managed to steal it from him. The Spirit and the Venom symbiote then bonded to Red Hulk,[21] who used the H'elian's Mirror Cauldron to create an antithesis of Blackheart, defeating him and returning Las Vegas to normalcy. In Hell, Mephisto gave Blackheart and Gari Oyle a new chance to try and take over his realm, but this time beginning from a point lower than the last.[22]

Back with a Vengeance

Some time later, Blackheart, who had somehow acquired back his demonic powers, manipulated Eternity into kidnapping his sister, Mistress Death, and trapping her outside himself, making dying impossible across the entire universe. With the chaos caused by Death's disappearance, Blackheart possessed Black Talon, who was helping Deadpool and Thanos in their quest of saving Mistress Death, in order to invade Hell without his father's knowledge. When the time came, he got out of Black Talon and battled Mephisto to take control over his realm. However, his plan eventually failed as Deadpool rescued Mistress Death, returning the universe to its natural order.[23]

Blackheart attempted to claim the Earth as his own, fighting the Avengers and defeating them effortlessly. His plan was thwarted by Spider-Man, whose venom blast attack took Blackheart by surprise, and forced him to retreat.[24] Blackheart's subsequent approach to world subjugation was much more subtle. He disguised himself as the mayor of Chicago, and worked in secret with Dray, the leader of one of the city's biggest gangs, the Southstone Rangers, to incite and exacerbate violence. Blackheart's endgame was to turn the city into the epicenter of humanity's downfall, causing mankind to destroy itself and leave the planet ready for reaping.[25]

Blackheart was opposed by Falcon and his apprentice Patriot, who attempted to control the riot. Blackheart used his disguise as the mayor to have Falcon and Patriot arrested,[26] and tried to dipose of them after revealing his true nature. However, they were rescued by Doctor Voodoo. When Falcon confronted Blackheart again, the demon unceremoniously ripped his soul straight from his body and sent him to Hell.[27] He was saved by the combined efforts of his allies.[28] During Falcon's third confrontation against Blackheart, Dray turned against his ally, and killed himself, using the Key of Abbadon gifted to him by Blackheart himself to force Blackheart back into Hell, putting an end to his scheme and the magically-fueled riot. Blackheart was taken by Mephisto's lackeys for punishment, but his father ensured him he was already planning Falcon's death, since Mephisto also had a feud with him for escaping his domain.[5]

Being held by Mephisto, Blackheart became privy to his father's latest scheme as he had given the younger Spider-Man and his Champions teammate Brawn a chance to go back in time and save their teammates Ms. Marvel and Viv Vision from dying at the hands of Zzzax, knowing the guilt of letting an innocent die because of it would tear them up inside.[29] However, Blackheart wasn't satisfied and went after the other Champions, starting with Ironheart, who had been pushing away Viv due to the synthezoid apparently having feelings for her. As he took control of the newer members of the team, he had them attack the original members.[30] The plan ended up backfiring as it ended up strengthening their bonds as Ms. Marvel revealed her identity to Spider-Man and the repowered younger Nova while Spider-Man and Brawn overcame their grief over making their decision. The Champions freed their teammates and united to defeat Blackheart. Furious over having his plans for the younger Spider-Man thwarted by his son's ineptitude, Mephisto captured and dragged Blackheart back to his realm.[31]

Like this? Let us know!
Retrieved from "https://marvel.fandom.com/wiki/Blackheart_(Earth-616)?oldid=5685160"
Community content is available under CC-BY-SA unless otherwise noted.