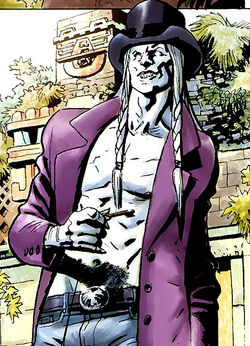 I fought my share of psychos as Ghost Rider, but he was one of the worst. He'll find out what you care about most and take it from you. No one's off limits -- women, kids... and he'll commit murder with less thought than you and I give to what size coffee we want.

Blackout is a demonic being known as a Lilin a race of demons spawned by Lilith, the self-professed Mother of Demons.[4] He is immortal or extremely long-lived. It is undetermined if the first generation of Lilin were demon/human hybrids, the result of Lilith mating with other demons, or creations of some other type. Lilith and her children led a campaign of terror and death against humanity, but at some point, Atlantean magicians incarcerated her within the belly of a Leviathan, after which many of the Lilin were killed off by their adversaries. Some survived, either escaping to other dimensions or assimilating themselves into humanity. For thousands of years, Lilith's children awaited her return.[3]

Initially employed by the demonic crimelord Deathwatch, he fought the Ghost Rider (Dan Ketch), and was disfigured in the battle when he was scorched by hellfire by trying to bite through Ghost Rider's jacket. This caused him to become Ghost Rider's sworn arch-enemy.[5]

At the NYU Medical Center, Blackout sneaks in and kills the janitor, and begins working his way towards a specific room. He locates the room of Barbara Ketch, and began telling her that he knows all about her brother, that he's been watching him and knows that he's the Ghost Rider. He plans on causing Dan unendurable pain, beginning with her, and then kills her.[6] Blackout is following Dan around, killing people that he meets up with including Ted Larsen and his priest Father McDonald. Ghost Rider rides out trying to find out what's going on, when he runs into a couple of Morlocks.[7]

One of Blackout's earliest victims is the Morlock; Pixie. The Morlocks had been in conflict over a plan to change babies into mutated forms. Ghost Rider's incorrect belief it was Blackout behind the vanishing of babies brings the attention of the real Blackout. Though the children are rescued safely, with the assistance of X-Factor, Blackout manages to kill Pixie and escape.[8]

In New York City, two sewer workers are sent to investigate why there is a major blockage, and discover dozens of bodies causing the problem. But before they can get out, Blackout adds two more bodies to the pile. Blackout visits Deathwatch, and informs him of his progress, Deathwatch then calls H.E.A.R.T. to tell them to ready their trap.[9] Ghost Rider, John Blaze, H.E.A.R.T., Blackout, and Deathwatch's men all collide in Central Park. In the end, Blackout was stopped when John shoots Ghost Rider while he is holding Blackout, resulting in Blackout's facing being further burned. [10] Blackout killed Dan Ketch, trapping the Ghost Rider on the mortal plane.[11]

Lilith found a away to return to the mortal plain.[12] Around this time, Blackout went on a murderous rampage through Central Park, leading to a hostage situation with the police. He later became allied with Lilith, the demon-goddess, who claimed she was his great-grandmother.Blackout would team up with many super-powered offspring of Lilith, all doing her will.[3]

Lilith has Pilgrim lead her to one of her lost children, Skinner. He's married and has a son now, but she demands that he fulfill his obligations. So he kills his family, and then goes on the hunt for Blaze. Meanwhile, Ghost Rider is continuing to hunt down Nakota, who is being transported around by Pilgrim to act as bait for Ghost Rider.[13]

In Greenland, Lilith has regenerated her children inside her, but she needs one of them to help her give birth to them, so she calls out into the world. Outcast answers his mothers call and slashing her open, her previously consumed children are reborn, more powerful than before. Blackout and Pilgrim head out immediately to kill Ghost Rider, and they intercept him and Seer on their way to the Night Club. They are caught by surprise, and Blackout threatens Ghost Rider with killing Mrs. Ketch again, and Pilgrim takes them to Forest Hills. There, Blackout holds her hostage, but Ghost Rider once again manages to drive them off, only to have Centurious arrive and takes Mrs. Ketch for himself, telling Ghost Rider that he will find him if he wants to see her alive again.[14]

Doctor Strange and the Midnight Son's are besieged at Doc's Sanctum. When Doc tries to freeze time, Lilith interferes and splits him into three entities. Sister Nil kills Imei and Doc has to destroy his own Sanctum.[15]

Blackout, Dark Legion and Meatmarket attacked Vengeance police precinct. He then went after an Ketch's friend Stacy Dolan. They were distracted by the arrival of Dr. Strange and other Midnight Sons. They cast a spell that protected the people from being seen by Lilin.[16]

It nearly killed Morbius to overcome his dark Lilin side but the Midnight Sons are hell-bent on finishing the job.[17]

Linda Wei tired of Blackout manipulating her, and informed Ghost Rider to where his next attack would be. Ghost Rider managed to save the family, but on that evening's news broadcast, Linda confessed everything and attempted to kill herself with a gun, she was stopped by Blackout from killing herself, but then he turned around and killed her himself on live television.[18] He was finally being captured by Ghost Rider. He was hoisted and chained over the World Trade Center where he is thought to have burned to death.[19]

He however survived and was locked up in the maximum security prison the Raft.[20] Much later, was seen among the escaping villains in the prison breakout at the Raft.[21]

He joined the Hood's criminal army.[22] It was created to take advantage of the chaos created due to the Superhuman Registration Act.[23] He was active with the group during the Secret Invasion of the Skrulls, where they worked with the heroes to defeat the alien army.[24] He worked with the team on various missions,[25] including facing the New Avengers.[26]

Blackout was recruited by the fallen Angel Zadkiel and helped in Dan Ketch's attack and murder of the Caretaker before battling Johnny Blaze.[27]

He later assembled a "task-force" of Ghost-Rider foes in order to hunt down and destroy both the Ketch & Blaze Ghost Riders.[28] Later, he attacked the church filled with gun-armed nuns alongside Orb, Deacon, and the new Vengeance. He cloaked the place in darkness, threatening and mocking the nuns, but was stopped by being shot with bullets covered in holy water. Blackout ran away screaming in pain into the night.[29]

Blackout and Deathwatch later joined the D.O.A. (Department of Occult Armaments) and worked with Skadi in attacking to town of Dayton, Ohio. Alejandra Jones became the new Ghost Rider who is able to defeated the demonic duo.[34] He later returned to fight an army of heroes facing Sin.[1]

Blackout kidnapped Superior Spider-Man's "Aunt May" and held hostage in exchange for technology. However Spider-Man hunted him down, and when he tried to bite Spidey on the neck, he was electrocuted due to metal plating. Otto then tortured Blackout, ripping out his teeth and claws. During the torture he begged for forgiveness and agreed to spread the word that "Peter Parker is off limits", but Otto continued to burn him using ultraviolet radiation.[4]

With the Assassins Guild

Blackout started working for the Assassins Guild and was partnered up with Threnody, who he was helping to feed her undead baby. When the pair were sent after Deadpool, Threnody turned on Blackout so she could get out of the Guild, but spared his life in thanks for his help.[35]

After Deadpool destroyed the Guild, Blackout stalked him and attacked him again for taking Threnody away from him, seemingly having been turned into a pseudo-vampire by Threnody's powers.[36]

Due to his demonic heritage as a Lilin, Blackout possesses a variety of superhuman powers.[37]

Hand-to-Hand-Combat: Blackout is a formidable hand to hand combatant and is also experienced in wrestling techniques. He is also a highly trained acrobat, which he uses in combination with his great agility to use a unique freestyle type of fighting that he combines with his more conventional fighting skills.[37]

Blackout possessed mechanically enhanced fangs and claws that he can use in combat situations. These enhancements were some form of implants and not part of his natural physiology. The claws were extremely sharp and, coupled with his strength, were able to rend most conventional materials, including some types of metals.[5] Later, upon his death and rebirth as one of Lilith's children, Blackout's fangs and claws became a natural part of his physiology.[14]

Like this? Let us know!
Retrieved from "https://marvel.fandom.com/wiki/Blackout_(Lilin)_(Earth-616)?oldid=6172249"
Community content is available under CC-BY-SA unless otherwise noted.