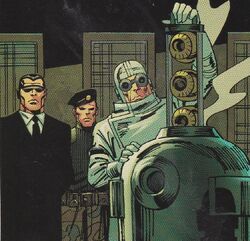 Desperate to stop me, the government turned to Blackworks Paramilitary Services and supplied them with samples of the Carnage symbiote Blackworks claimed they had developed a safe process to transform ordinary soldiers--into a team of super bio-predators that could stop me. Maybe the technology would have worked if they'd used regular people instead of combat-hardened mercenaries. Unfortunately, we'll never know.

In an attempt to defeat the brutal vigilante known as Mayhem, the government staffed the Blackworks Paramilitary Services to create Super-Soldiers from the Carnage Symbiote to stop the mayhem.

Unfortunately, the symbiote took over the subjects and wreaked havoc on the world.[1]

Retrieved from "https://marvel.fandom.com/wiki/Blackworks_Paramilitary_Services_(Earth-19725)?oldid=4776075"
Community content is available under CC-BY-SA unless otherwise noted.