One Man Still Has The Edge.

Two years have passed since the ending of the first film, and Blade has been keeping himself busy in the hunt for Whistler. He has been sweeping across Russia and eastern Europe searching for his old friend and mentor, enlisting the aid of a young man named Scud to design him a new line of gadgetry and weaponry. In the first scene of the film, Blade fights his way through a large gang of vampires, leaving one of their numbers alive yet telling him he will be back for him. Finding Whistler locked in a tank of blood by a cruel gang of vampires who were keeping the old man alive for purposes of torture. Blade rescues him and brings him to Prague.

Meanwhile, a crisis has arisen in the vampire community. What seems to be a more developed strain of vampirism (dubbed the "Reaper Strain") is sweeping through their ranks, giving its carriers fearsome new characteristics. The original carrier of the strain is identified as Jared Nomak, a one-time vampire who has become something deadlier. Far stronger than common vampires, the reapers have laterally-opening mandible jaws, leech-like suckers, and hearts encased in a thick layer of bone, making them highly resistant to harm barring sunlight. In order to combat the virus, the vampire overlord Eli Damaskinos sends two members of his commando elite, Asad and Nyssa (who is Damaskinos' daughter), to find and strike an uneasy treaty with Blade. Whilst Blade may hate vampires, the reapers are far more dangerous and the survival of the mortal enemies depends on their cooperation.

To this end, Blade teams up with the The Bloodpack, a group of vampire warriors and assassins who were originally assembled to kill Blade. In order to obtain some measure of control over the group, Blade singles out Reinhardt (played by Ron Perlman), one of the group's more dominant members, and embeds a remotely-activated explosive device in the back of his head. Setting their mutual hatred aside, Blade leads the Bloodpack in the fight against the reapers and the investigation into their origins. During this time, Blade forms something of an intimate relationship with Nyssa, the daughter of Damaskinos and member of the Bloodpack.

After a climactic battle against numerous reapers in their hive in the sewers, Blade is apprehended by Damaskinos' forces, along with Whistler and Scud. As it turns out, the Reaper Strain is not a virus at all, but rather a genetic experiment gone wrong. In his efforts to create a day-walking vampire race, Damaskinos had numerous experiments performed on Nomak, who is, in fact, his estranged son. He remarks that Nomak was the first carrier of the strain but ultimately flawed, seeing as he was vulnerable to daylight, as were all the other carriers whom he'd infected. Damaskinos then reveals another horrible truth—he has been creating many more reapers, all of them incubated in the form of a fetus. All they require now is Blade's biological make-up, and in order to extract this, Damaskinos plans to have Blade killed and dissected.

During his captivity, Blade attempts to activate the pre-placed explosive in Reinhardt's skull, at which point Scud reveals the bomb (which he himself had crafted) was never designed to detonate. Scud himself is, in fact, one of Damaskinos' human servants (i.e. a familiar) and planned to side with the vampires rather than fighting against them. However, Blade reveals that he has always known of Scud's duplicity. Activating a second switch on his remote, Blade kills the unfortunate Scud, who unluckily happened to be holding the bomb at the time.

With the surprise death of Scud in their midst, Damaskinos' security force moves in and pacifies Blade. Blade and Whistler are then hauled away, Blade to be drained of his blood and Whistler to be further tormented by Reinhardt. Whistler soon escapes his imprisonment, however, and starts crawling through underfloor service ducts searching for Blade. He finds his ally just as Kounen is interrupted by the sound of alarm klaxons heralding the intrusion of Nomak. Whistler shoots him dead and proceeds to free Blade. Struggling to support the critically injured Blade, Whistler doesn't get far before running into Reinhardt. Blade manages to drop into a reservoir of blood and uses it to restore himself back to health. He then fights his way through Reinhardt and others of Damaskinos' henchmen, before heading towards the lead vampire himself.

Meanwhile, a vengeful Nomak rampages through Damaskinos' stronghold, seeking revenge on the father who mutilated him and turned him into the first reaper. Just before he can escape, Damaskinos is betrayed by Nyssa (who became disillusioned with her father's extreme methods) and killed by Nomak. In order to "complete the circle", Nomak also bites Nyssa and then makes to leave, whereupon he is confronted by Blade. After a very physical fight, Blade finds the weak spot in Nomak's physical defenses and jams his sword beneath Nomak's arm, bypassing the bone shield of his heart. Nomak finds some comfort in his imminent death and thrusts the broken sword deeper in, penetrating his heart and ending his own life. With Nomak dead, Blade then carries a weak, dying Nyssa outside for the sunrise, where she disintegrates in his arms.

In the film's somewhat comical final scene, the vampire Rush left to live in the opening scene is in London, preparing to make use of a peep show booth. However, as soon as the curtains open, he is shocked to find Blade on the other side of the glass, who casually remarks "You didn't think I'd forget about you, did you?" and rams his sword into Rush's skull. 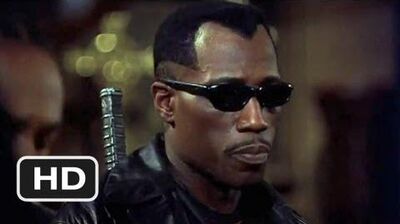 Retrieved from "https://marvel.fandom.com/wiki/Blade_II_(film)?oldid=6080284"
Community content is available under CC-BY-SA unless otherwise noted.