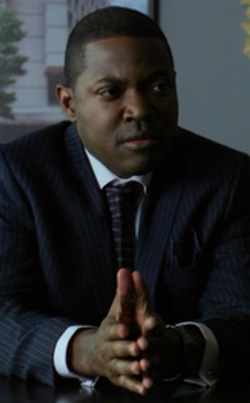 Blake Tower is an attorney who works for the DA. He helped the DA attempted to charge Jessica Jones for the murder of Kilgrave, but wasn't able to due to Jessica's legal council.[1]

He participated when the DA attempted to use Grotto, an Irish gang member seeking witness relocation protection, as bait to capture or kill The Punisher.[2] Tower secretly aided Karen Page by handing over the Punisher-related files in order to help expose The District Attorney’s role in inadvertently killing Frank Castle’s family.[3]

Tower was also present coordinating with the NYPD during a hostage situation at the Harlem’s Paradise Nightclub.[4]

Like this? Let us know!
Retrieved from "https://marvel.fandom.com/wiki/Blake_Tower_(Earth-199999)?oldid=6283022"
Community content is available under CC-BY-SA unless otherwise noted.