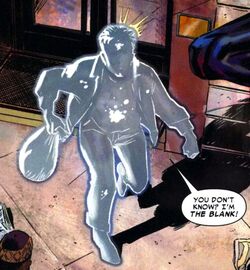 Hair
Brown
Origin
Origin
He stole a force-field belt from a dead scientist and after he was hit by a gravity wave from Graviton, the nanotech belt fused with his abdomen.
Reality
Earth-616
Place of Birth
Los Angeles
Creators and Appearances
Creators
Roger Stern, Bob Hall
First Appearance
West Coast Avengers #2
(October, 1984)

The man who would be known as the Blank was little more than a disgruntled, unlucky, and unemployed drifter who encountered a scientist while waiting for a bus. The scientist had just quit his job at the research labs of Stark International (as it had just been bought out by Stane International) and had taken his research with him. The scientist, too impatient to wait for the bus, was hit by a car, and the drifter stole the scientist's briefcase in the ensuing confusion. Discovering the force field generator, the man began a crime spree. Soon, however, he was interrupted by the Avenger Wonder Man, and later, by one of the Avengers' initial outing as a west coast branch team.[1]

Escaping to recharge his belt again, the man inadvertently freed the Avengers' villain, Graviton, who had used the charger as a beacon to break out of an interdimensional void. Graviton took the Blank as his ally for a brief time, as he attempted to take over all the gangs of Southern California. However, the Blank was literally discarded into the sea by Graviton, who had grown tired of Blank's whining.[2]

The Blank drew the attention of Spider-Man when he robbed a bank that was being visited by Aunt May Parker. Spider-Man followed the F.B.I. after the Blank robbed an armored car and was able to subdue him by completely encasing him in a ball of spider-webbing.[3]

The Blank's powers derive from his hi-tech field generator belt. The generator produces an obscuring force field which complete conceals his features and provides virtually total protection against all forms of damage. The force field also allows the Blank to easily escape entanglements, wrestling holds, and other forms of attack. The field must be recharged ever 12 hours by the charger built especially for this purpose.

Like this? Let us know!
Retrieved from "https://marvel.fandom.com/wiki/Blank_(Clyde)_(Earth-616)?oldid=6430544"
Community content is available under CC-BY-SA unless otherwise noted.