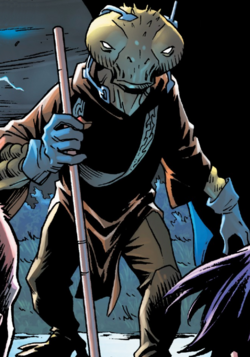 Blaquesmith was born in the late 37th century, 100 years after Apocalypse conquered the world.

His genescan stated him to be X-Factor Negative, and the biotechs stated his appearance to be the result of a genetic defect and not an X-Factor mutation. That test was seemingly wrong, as Blaquesmith exhibited a telepathic gift,[2] and was later confirmed to be a mutant.[1]

Another account stated that Blaquesmith willingly twisted and corrupted his mortal form, as he understood it was necessary to mentor the Chosen One of the Askani, Nathan Summers.[1]

He was abandoned by his mother, sold to scavengers who needed a new boy.[2]

Blaquesmith met Rachel Summers, who he called the "Bright Lady", and she sensed his psychic potential, but denied his request to become her disciple, after she saved him from a merchant. Over the next year, Rachel gathered followers, under the name Clan Askani, meaning "family of outsiders".[2]

Blaquesmith was enslaved at the Crestcoast power-plant, Hellhole, until the Clan Askani arrived and disabled the plant. In the battle, Ozana, a rare Gibson-9 warbot, was damaged and Blaquesmith was rescued, as he could fix the bot. Blaquesmith was instructed, by Rachel herself, who gave him information about various time-traveling threats and future events. The Askani developed tenets, such as "what is, is", that fate must be embraced, and "thanks for today, please for tomorrow", a belief that the past brings hope, and preached that the "Sacred Timeline" should be preserved and nurtured through careful time travel. Rachel accepted anyone as Akani; via discipline and training, some achieved psychic power, enabling such Askani practices as mediation performed while levitation upside down. Over the next several years, believers deified the ancient X-Men: "the Xavier" became a father figure, the Bright Lady a mother goddess, and the prophesied "Dayspring" or "Askani'son" their messiah. The Askani also believed in tiny winged Wysps that carried prayers and feared the monstrous Daegon, that hunted the weak in the Apocalypse's name. The Askani developed a ceremonial language, unique martial arts and the Psimitar, a weapon that focuses psionic energy. The Askani took, as their symbols, the Phoenix and the scarred eye, reminiscent of the scars around the Askani'son's right eye.[3]

Eventually, Mother Askani, as Rachel was now called, decided to fulfill the Askani'son prophecy; she and the synthcon Boak sent a Sister Askani, who sacrificed her physical body to become energy and tasked with preservation of the Askani'son, to the past to retrieve him. Learning of the infant Askani'son's arrival, Apocalypse and his Canaanites attacked, killing many Askani and nearly wiping-out the order. Blaquesmith went into hiding and was eventually captured.[4]

After Mother Askani's death and the Askani'son, Nathan, was imprisoned, his Techno-Organic Virus infection worsened and Blaquesmith broke into his cell and extracted a glowing orb from the metallic flesh of Nathan's chest, that spoke, and contained it in an orb. After 'Strator Umbridge realized that Nathan was the Askani'son, she sent guards and Blaquesmith seemingly sacrificed himself for Nathan and Tetherblood to escape, telepathically telling Nathan to find the remaining members of the Clan Askani. After battling more soldiers at a milk bar, Blaquesmith returned and told Nathan to stick to the plan and then disappeared to the Astral Plane. After arriving in Ebonshire, Nathan asked Madame Sanctity to instruct him in the ways of the Askani. Even though Nathan was a male, Sanctity ordered Aliya to instruct him, because he was the Askani'son, and Blaquesmith told Nathan she was the one he was destined to learn from.[5]

Following the destruction of the Askani Sisterhood, by the New Canaanites led by Tribune Haight and Stryfe, Blaquesmith, Nathan, Tetherblood, Aliya were determined to carry-on the Askani legacy as the guerrilla army the Clan Chosen. Training in the Askani ways under surviving Askani elders, the Clan Chosen repeatedly battled the New Canaanites and the Scions of Apocalypse, led by Stryfe. The Clan Chosen also clashed with the Neo-Canaanites, a group that also wished to claim Apocalypse's power. When Stryfe's spy, Korless, infiltrated the Clan and Stryfe psychically attacked Nathan, Stryfe captured Tetherblood and the glowing flask from Nathan's camp and Stryfe tortured Tetherblood to find out its importance. The withdraw of the orb from Nathan caused him to become very sick and Blaquesmith sent Aliya to the past to find Cable, the adult Nathan. Aliya was successful, though she and Nathan were unaware of Cable's true origin. Cable arrived with Domino, who seemed to know Blaquesmith, and he informed her that if his future self sent her, she would be important to the Askani'son's mission. Blaquesmith also informed Cable not to divulge his true origins. Cable returned with the flask and activated Ship's A.I., which again merged with Nathan.[6]

As part of his mission as the Askani'son, Nathan returned to the 20th century to foil the plans of Stryfe and preserve Apocalypse's rise to power. To ensure that he did not falter from his mission or disrupt the timeline and charged with the grim task of eliminating him if he became unstable, Blaquesmith was sent to an earlier time also, unknown to Nathan. Blaquesmith journeyed to the modern era and set-up in an abandoned ship in the Inner Harbor of Baltimore, Maryland, signaling Nathan, Cable as he was then called, when he felt it was safe enough to reveal himself.[7]

Sensing his arrival and exact genetic signature to Cable, Blaquesmith tasked Cable to destroy X-Man.[8] Blaquesmith said he was too dangerous, but Cable disagreed and helped the young man instead. At that time, Cable realized that Blaquesmith's preparations to eliminate Nate Grey meant his mentor was also prepared to eliminate him, if needed.[9]

Onslaught sensed Blaquesmith as a threat and conducted a raid, then later sent Post to destroy his ship, but Blaquesmith managed to escape.[10]

Attempted to create another Clan Askani in the modern era, Blaquesmith gave Psimitars and Askani training to the long-lived Dark Mother and her Dark Sisterhood, but after he learned of her evil intentions, he had Cable destroy the cult.[11]

Thrown in a future after the Second Coming, Cable met an alternate Blaquesmith.[12]

Blaquesmith returned to an early point in his past when Cable was much younger in order to recruit him due to the crumble of time itself. He took Nathan to a safehouse that was built by the older Cable to show him a visual of the X-Men who traveled to the present but did not return back to their own world which resulted in the death of Iceman and created the time divergent reality were all mutants were killed by the Sentinels.

Blaquesmith incorporated a temporal device in Nathan's techno-organic arm known as Graymalkin which would allow him to travel to the past and correct the timeline that his older self was to foolish to handle himself.[13]

After he completed the correction, time became constant again. Blaquesmith was next seen with other members of Clan Chosen when Stryfe played a ruse as he used a defenseless Rachel who was controlled by the Cronen to masquerade as Mother Askani. She sent a telepathic broadcast to all the Clan Askani to come to city of Ebonshire which included Blaquesmith.[14]

Blaquesmith was described in a high-order telepath and telekinetic.[1]

Time Travel: Possesses the limited[1] psionic[citation needed] power to displace himself and others at almost any specific point in the timestream and then reemerging in the physical world, from as much as a few minutes to years by generating chronal energies.[citation needed]

Blaquesmith is an accomplished inventor and seems to intuitively understands machines.[citation needed]

Blaquesmith was trained by the Clan Askani in combat.[citation needed]

Like this? Let us know!
Retrieved from "https://marvel.fandom.com/wiki/Blaquesmith_(Earth-4935)?oldid=5838256"
Community content is available under CC-BY-SA unless otherwise noted.