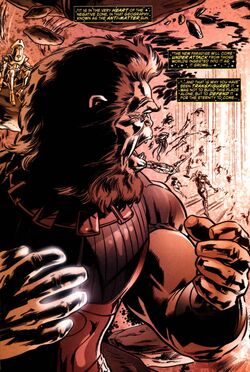 The past history of Blastaar on Earth-9997 presumably matches that of his Earth-616 counterpart.

But as more souls entered Paradise, it began to expand and consume entire worlds within the Negative Zone. Annihilus and Blastaar would blame Reed Richards and use the Negative Zone Portal to attack the Earth. Arriving in the Baxter Building, Annhihilus, Blastaar and their followers would crash a tour of the Baxter Building. This would lead to a clash against the Law, the Guardians of the Galaxy and the Heralds. The clash would ultimately end when Reed Richards would come to investigate the anomaly in the Negative Zone.

It was later revealed that Paradise was not expanding, but there was a barrier that was intended to push out the Elders of the Universe and prevent Earth-9997 from any manipulations. As Mar-Vell's plans came into fruition, the barrier expanded across the entire universe. It is presumable that Blastaar and the other citizens of the Negative Zone returned to their home, however their ultimate fate is unknown.

Superhuman Speed: Blastaar is capable of running and moving at speeds greater than even the finest human athlete.

Superhuman Stamina: Blastaar's musculature generates considerably less fatigue toxins during physical activity than the musculature of a human being. He can exert himself at peak capacity for several days before fatigue begins to impair him.

Superhuman Durability: Blastaar's body is highly resistant to all forms of physical injury. He is capable of withstanding the impact of .30 caliber, armor piercing machine gun shells, temperature extremes from as low as -200 degrees Fahrenheit to as high as 11,000 degrees Fahrenheit, falls from tremendous heights, great impact forces, and powerful energy beams without sustaining injury. Blastaar is also capable of surviving for weeks at a time without food or water. He can also survive in an airless vacuum for several months at a time by willing himself into a state of suspended animation.

Superhuman Agility: Despite his great bulk, Blastaar's agility, balance, and bodily coordination are enhanced to levels that are beyond the natural physical limits of even the finest human athlete.

Superhuman Reflexes: Blastaar's reaction time is enhanced to a level that is beyond the natural physical limits of even the finest human athlete.

Force Blasts: Blastaar can generate concussive blasts, presumably by some biological means, and direct them through his fingers. These blasts have a range of 1,000 feet and can penetrate 6-inch titanium-plated steel.

Blastaar is a formidable hand to hand combatant and is particularly skilled in using a combination of his energy blasts and raw brute strength with great efficiency. Blastaar also has access to and understanding of highly advanced technology, particularly weaponry.

Like this? Let us know!
Retrieved from "https://marvel.fandom.com/wiki/Blastaar_(Earth-9997)?oldid=5247023"
Community content is available under CC-BY-SA unless otherwise noted.