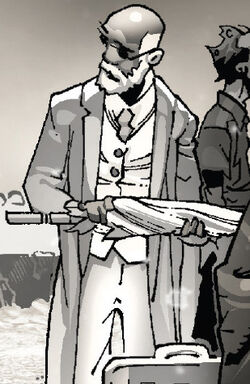 Blaylock contacted Elsa Bloodstone to kill the newly appointed Monster King of Staten Island and force all the monsters out of there, but she declined the job, forcing him to hire Deadpool instead.[1]

Despite her initial refusal, Elsa eventually reconsidered the offer and tried to murder the king, but Deadpool was already on scene as well and eventually managed to kill him, thus becoming the new king, in accordance with an old Monster Law.[2]

Meeting with Elsa, Blaylock blamed the unforeseeable disaster on her, but she told him she'd "take care of it".[3]

Like this? Let us know!
Retrieved from "https://marvel.fandom.com/wiki/Blaylock_(Earth-616)?oldid=5865068"
Community content is available under CC-BY-SA unless otherwise noted.