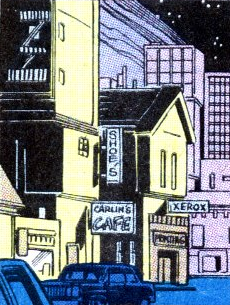 While Rick Jones was giving a musical performance, he was contacted mentally by Captain Marvel. Leaving his gig to a back alley right off Bleecker Street, Rick was informed by Mar-Vell that he discovered a way to get out of the Negative Zone prison that he was living in when Rick was present on Earth, and decided to head to the Baxter Building to free him from their shared existence.[1]

After having kidnapped Roxanne Simpson, Curly Samuels transported her unconscious victim to a satanist church into the dark, dank recesses of a cellar beneath Bleecker Street, where he turned her over to Satan's followers in preparation of the sacrifice to their master. The Ghost Rider arrived just in time to stop Curly before he could sacrifice Roxanne to Satan, but Satan intervened changing Curly back into Crash Simpson and ordering him to kill Ghost Rider.[2]

As Crash Simpson couldn't hurt his daughter, Satan transported him and Ghost Rider to Hell to battle each other. The next morning Johnny Blaze woke up close to Roxanne, who had no memory about what happened before, and they both headed back to Madison Square Garden.[3]

Many years later, suspecting that Mr. Gregg was only a copycat of the Sin Eater, Spider-Man and Daredevil came here to inspect his home, and they found it adjacent to detective Stanley Carter's apartment, where they discovered all the Sin-Eater's gear.[4]

Sometime later, Spider-Man and Shroud defeated Joey Gregson and McHenry, who was gunrunning near the ruins of Stephen Strange's Mansion, but Gregson and his men were then possessed by the masks of Cyttorak.[5] Inadvertently freed by Spider-Man, the masks were then eventually blocked by the two heroes.[6]

Like this? Let us know!
Retrieved from "https://marvel.fandom.com/wiki/Bleecker_Street?oldid=5785486"
Community content is available under CC-BY-SA unless otherwise noted.