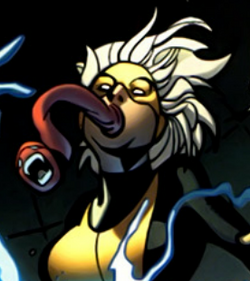 Very little is known about Bliss' life before she joined the Morlocks under Callisto. She became loyal to Masque and helped him takeover the Morlocks.[1]

Masque sculpted Bliss to resemble Jean Grey when he tried to impersonate the X-Men. After Masque's original Storm-Doppelganger was killed by Forge and Banshee, Masque reshaped Bliss as Storm.[2]

Bliss continued to work with Masque while he searched for Magneto, although she seemed uneasy with some of his tactics especially his poor treatment of fellow Morlocks, Caliban and Leech. Bliss continued to follow Masque until the X-Men defeated him and thwarted his plan to bomb a subway station.[4]

When Cyclops and Storm came to propose to the Morlocks to join them in San Francisco, she was possessed by the Shadow King along the other Morlocks. She was made to fight Cyclops, in order to distract him enough to take control of him.[5]

Along with the Morlocks and most of the mutant community, Bliss accepted Cyclops' offer to live on Utopia. While on Utopia, Bliss participated in multiple riots and aggressions:

She teamed up with Toad, Litterbug, and Dragoness to try to commandeer the Utopia water supply. They were stopped by Iceman.[6]

When the Evolutionaries came to the mutant nation, she, along with Toad, Masque, Litterbug, and Dragoness, targeted the Stepford Cuckoos and Cerebra in order to learn more about the aggressors, under the impulsion of Toad who was linked to them by his past.[7]

Along with Dragoness, Random, Erg, and Litterbug, she assaulted Hope Summers and the Lights as they felt once again under-treated by the X-Men, and later participated in the riot/crucifixion of Hope under Zero's control.[8]

Some time later, Bliss had become an inmate in the Robert Kelly Correctional Facility for mutants. She was part of the entourage of Crazy Maisie, the alpha inmate of the female general population.[9]

She later reappeared to defend lowtown from the attacking Reavers with the Morlocks.[10]

Bliss is a mutant. Her powers include:

Retrieved from "https://marvel.fandom.com/wiki/Bliss_(Morlock)_(Earth-616)?oldid=6445237"
Community content is available under CC-BY-SA unless otherwise noted.