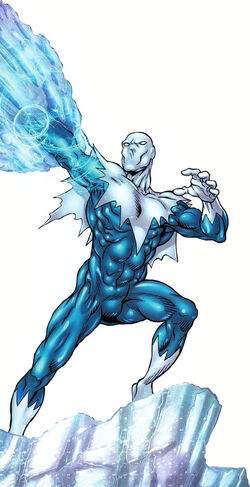 The Blizzard wore a battlesuit containing micro circuited cryogenic units (micro-cryostats) that enabled him to project an intense cold through the ducts that encircled his gloves. With the freezing units at full capacity, the Blizzard could lower the temperature of a twenty by twenty foot room 68 degrees Fahrenheit to 32 degrees Fahrenheit in thirty seconds. Also integrated into the lining of his sleeves was a system of flexible tubing that carried water to miniature electric turbines in his gloves. By emitting the water as a mist and freezing it with his micro-cryostat units, he could create snow flurries. By emitting it as a spray, he could create sleet. By emitting it as a stream, he could create icicles. By concentrating both gloves' power on a single stream of water, he could create a super-dense ice-darts, capable of being flung with enough force to dent half-inch thick steel. The water and cold ducts were capable of shooting a steam of snow with a maximum range of fifteen feet. The Blizzard was able to encase people in a layer of frost or to create an ice-slide beneath him.[1]

Blizzard's battlesuit was fully insulated so that he was immune to the effects of his weaponry. He carried the power-unit for his microcircuitry on his back.

Like this? Let us know!
Retrieved from "https://marvel.fandom.com/wiki/Blizzard_Armor?oldid=6432212"
Community content is available under CC-BY-SA unless otherwise noted.