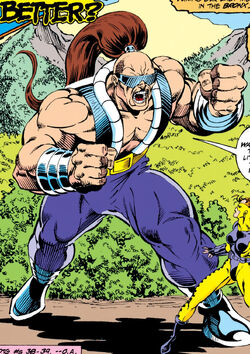 By the 31st century, mutant humans had abandoned Earth and lived on a colony world known as Haven. Mutants did not breed true, however, and after many generations only a few mutants remained. Blockade was one of nine existing mutants on Haven in 3014.[1]

Blockade can increase his size, geometrically increasing his strength and durability.

Like this? Let us know!
Retrieved from "https://marvel.fandom.com/wiki/Blockade_(Earth-691)?oldid=4621564"
Community content is available under CC-BY-SA unless otherwise noted.