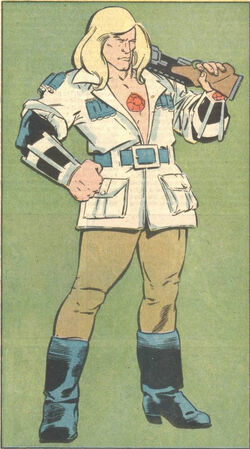 In the Hyborian Age, a meteorite landed on Earth in Northern Vanaheim on the European continent, circa 8250 B.C. It was controlled by an entity called the Exo-Mind, who wanted to take over the world. To that end, it sent its agent, Ulluxy'l Kwan Tae Syn, to find a host for it. However a local human hunter/gatherer found the rock and fought Ulluxy'l Kwan Tae Syn. In the fight, the meteor was smashed and its fragments scattered. One of the fragments (also called the Bloodgem) was embedded in the human's chest, and the explosion killed the human's tribe. The human vowed revenge on Ulluxy'l Kwan Tae Syn. Because of the gem in his chest, he became immortal, and later became known as Ulysses Bloodstone.[1]

The Bloodstone gem fragment was inherited by Ulysses' daughter Elsa,[2] and a smaller portion was later given to his son Cullen.[3]

A human mutate that would eventually be known as Maha Yogi also witnessed the Bloodgem's shattering and claimed one of the fragments for himself, called it the "Jewel of Jeopardy" and used it to attain immortality and enhance his magical talents. When the jewel was crushed by the Hulk, it caused Maha Yogi to age 10,000 years in an instant.[4]

When Elsa Bloodstone confronted the Bone Beast Queen, the monster cursed her gem which began killing her.[5] In order to save her, Deadpool tore the gem out of her and put it inside him.[6]

Daken once possessed a Bloodstone fragment that he tore out of Frankencastle, which enhanced his mutant healing factor, but with adverse effects, such as tumors which would grow wherever he was wounded, until his father, Wolverine, tore it out of him.[7]

Allegedly the Bloodstone was a piece of the Lifestone Tree.[8]

Like this? Let us know!
Retrieved from "https://marvel.fandom.com/wiki/Bloodgem?oldid=6437022"
Community content is available under CC-BY-SA unless otherwise noted.