Blue Area of the Moon 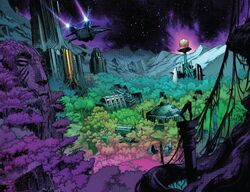 The Blue Area of the Moon was an artificial, Earth-like environment in the Luther Crater. The Blue Area was first explored by the Fantastic Four who discovered that the area contained the ruins of an alien city and the Citadel of Uatu the Watcher.[2]

The Blue Area was created by the Skrulls one million years ago as a testing site for the Kree to prove what they could accomplish. Their competitors were members of the Cotati, the other sentient race native to Hala, an equal number of whom had been left on a different barren moon. While the Kree built the Blue City that fills most of the Blue Area, the Cotati created a complex but subtle ecosystem on their planetoid. The Blue City was left empty after the Skrulls returned the Kree to Hala where, once they learned that the Skrulls had judged the Cotati’s achievement to be greater, the Kree rebelled and killed first the Cotati and then the Skrull party, and took the Skrull starship.[3]

The Blue Area was rarely visited over the millennia that followed. Then a decade ago, the Fantastic Four and the Red Ghost both landed there.[2] In the years since, the Blue Area saw increasing traffic. The area was used as the site for the trial by combat of Phoenix and the X-Men against the Shi'ar Imperial Guard.[4]

When the pollution on Earth became too deadly to the Inhumans, they sought the aid of the Fantastic Four to help relocate their home of Attilan. With the assistance of Mister Fantastic, the entire city was transported to the Blue Area where it remained for quite some time.[5] During a period in which the Watcher was absent from his home, Nathaniel Richards attempted to plunder the technology stored there. Instead he triggered a trap that sucked the citadel into a vortex and threatened to destroy Attilan in the process. It was saved by the Fantastic Four, who reduced the city down to size and took it aboard their ship the Stealth-Hawk.[6] Attilan was later returned to Earth and restored to its natural size on the risen continent of Atlantis.[7]

Shattered by the trap that had sucked the Watcher's citadel into that vortex and with its atmosphere generators rendered inactive, the Blue Area soon became incapable of supporting life, and remained lifeless and empty for months, except for the Watcher's citadel, which had somehow returned. Then the vengeful Kree who called themselves the Lunatic Legion decided to use the Blue Area as their base for their upcoming strike against the people of Earth.[8] These Kree rebuilt the Blue Area using the Skrull technology hidden there [9] and brought the Supreme Intelligence there after rescuing it from beneath the surface of Earth.[8] Later, after the Legion's attack on Earth had been thwarted by the Avengers, SHIELD and Starcore constructed an outpost in the Blue Area where they kept the Supreme Intelligence a prisoner while studying the Blue Area.[10] The Blue Area was also where the opening salvo of the Destiny War between Kang and Immortus began.[11] After a turbulent time on Earth, the Inhumans eventually returned to the moon, moving Attilan there once again.[12] After the Secret Invasion of Earth, the Inhumans left the moon for the stars where they took control of the Kree empire.[13]

A few months later, the Blue Area was where the massive City-Ship of the Universal Inhumans landed on the Moon when it arrived for the Time of the Gathering.[14]

In more recent times, the Blue Area was where Uatu and Iron Man found a body of the Living Tribunal[15] after he had been killed by the Beyonders and one sliver of his body ended up in each reality.[16] Later the Watcher was murdered on the moon by an unseen assassin, leading to an investigation by the Avengers and other heroes to learn the identity of his killer.[17] Ultimately, Nick Fury was exposed as Uatu's killer and as punishment the Watchers forced him to take Uatu's place, trapping him on the moon and dubbing him the Unseen.[18]

The locale was eventually revitalized by Nightcrawler who planted Flowers of Krakoa there at the behest of X to create a Krakoan Habitat, a diplomatic biome interconnected to Krakoa's collective consciousness, known as the Summer House.[19]

As the Kree-Skrull Alliance approached Earth, Quoi and his father Swordsman arrived at the Blue Area of the Moon and turned it into a beautiful forest. After the Avengers arrived, they assisted Quoi in expanding his garden.[20]

As Empress Lilandra teleported the X-Men to the Blue Area of the Moon and sentenced Phoenix to death, the mutants challenged the Shi'ar Imperial Guard to trial by combat. Suddenly appearing from the Hyborian Age, Conan mistook the Phoenix for his beloved Red Sonja and took out Cyclops with a large rock, sufficiently shattering the psychic rapport shared with Phoenix. Without that rapport, and without Wolverine to hurl Colossus at her, nothing prevented Jean Grey from transforming utterly and completely into her dark persona before she could destroy herself, unleashing the full fury of Phoenix.[21]

The Blue Area of the Moon was one of several places visited by the heroes from Marvel and Capcom during their conflict against Onslaught.[22]

In this universe, the Blue Area, similar to its mainstream counterpart, was the place where Uatu and the Inhuman Royal Family resided. Eventually, as Earth's atmosphere kept poisoning, the area became a city housing the emigrated Humans, Mutants, and other variants.[23]

Like this? Let us know!
Retrieved from "https://marvel.fandom.com/wiki/Blue_Area_of_the_Moon?oldid=6038067"
Community content is available under CC-BY-SA unless otherwise noted.