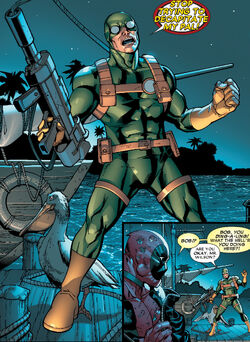 I am letting you go, Mr. Wilson.

Bob, Agent of Hydra, was a sidekick of Deadpool. A cowardly young man, Bob was persuaded into joining the criminal organization Hydra by his wife, Allison, who accused him of not being able to hold a steady job. The thought of a stable career with a dental plan also appealed to Bob, though he was disappointed to find out Hydra does not offer full dental like AIM. During Deadpool's assault on a Pakistan Hydra Base, he ran into Bob and coerced him into helping him. Bob was hesitant, as Hydra would not allow him back into the organization after having betrayed them, but Deadpool, four inches tall at the time, tortured him with a security card until he relented. He then forced Bob to fly them to safety in one of Hydra jets, though Bob did not know how to pilot an aircraft.[3]

After Deadpool, Agent X, and Bob returned to the United States, they found Outlaw and Sandi missing. Bob accompanied Deadpool on his mission to save the girls and subsequently became an honorary member of Agency X. He continued to work with the group on their various missions, and was referred to as Deadpool's "Pet" (or "Minion", because that is "more PC"). Bob was then shot in the leg, during a raid on the very same HYDRA base Deadpool kidnapped him from, in an attempt to save Weasel from Wolverine. When Wolverine cut off Deadpool's head, Bob was the one who put it back and let Deadpool's healing factor kick in. After Deadpool and Bob rescued Weasel, they were suddenly transported to the past, where they aided Captain America and Bucky in stopping Arnim Zola. Following that adventure, Bob accompanied Deadpool on a mission through various dimensions to help Doctor Strange save reality after it was damaged by T-Ray's novice magic.[7]

He also travelled with Deadpool and Weasel to the Savage Land, where he ran away from an assortment of dinosaurs. Deadpool attempted to teleport the dinosaurs to Genosha as a prank on Magneto, but instead they were sent to the Genoshan Embassy in downtown Manhattan, and became infected with alien Symbiotes. During the resultant battle, Bob's attempted to flee and accidentally caused the death of one of the creatures while a news crew watched. Thinking his actions were intentional, they interviewed Bob and mistook the 'H' on his uniform as standing for"Hero". He then received a text message from Allison who had seen the events on the news and thought it was hot.[8]

Bob was later seen assisting Deadpool defeat Tiger Shark. When Deadpool asks him what he's doing Bob replied "U-uh saving you". Then Deadpool told Bob to throw him the rifle, Bob threw it to him but it didn't reach him and instead fell into into the water where Tiger Shark was waiting because "Bob throws like a girl." He was then knocked into the water himself, however Deadpool saved him at the last second and they were able to outmaneuver Tiger Shark for a while. It was Bob, after a shot to the hand, that explained to Deadpool that he along with Tiger Shark were hired by Norman Osborn, who Deadpool soon realized stole from him during the height of the Secret Invasion against the Skrulls.[9]

Later, Bob was called upon by Deadpool because he wanted Bob and himself to be pirates. Bob got stuck as Deadpool's parrot and came down with scurvy (or possibly heat stroke).[10] During World War Hulks, Bob used a time platform to send Hulkpool (a gamma-powered Deadpool) back in time to kill Deadpool.[11] Unfortunately, it sent him to an alternate reality where the Thing was Blackbeard. Bob tried to correct the mistake and ended up transporting dinosaurs to that reality.[12]

Normal human who does not exercise.

Many, especially his own cowardice.

Like this? Let us know!
Retrieved from "https://marvel.fandom.com/wiki/Bob_Dobalina_(Earth-616)?oldid=6549060"
Community content is available under CC-BY-SA unless otherwise noted.