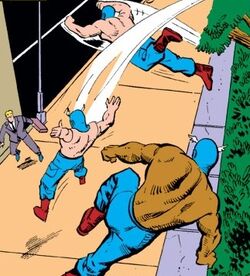 The BUCkies were a secret organization that supported the Super Patriot. They wore Captain America masks and performed vigilante justice against those opposed to their conservative values. Captain America opposed and fought the BUCkies and their leader John Walker.[1]

The BUCkies were all strength enhanced indiviudals. Their leader, John Walker and Lemar Hoskins were hand-picked by the government to be the "New" Captain America and Bucky.[2] They later assumed the name USAgent and Battlestar respectively.[3]

Hector Lennox and Jerome Johnson were largely ignored by the new Captain America and Bucky. The two took revenge by assuming the costumed identity of "Left-Winger" and "Right-Winger" respectively. They first stole Guardsman Armor and battled Walker and Hoskins[4] and later publicly revealed John Walker's identity during a press conference Walker was holding.[5] As a result, the Watchdogs tracked down and murdered Walker's parents in Georgia. Outraged, Walker took revenge by badly beating Lennox and Walker. He then tied their bodies together and ignited them into an incendiary blaze.[6]

Like this? Let us know!
Retrieved from "https://marvel.fandom.com/wiki/Bold_Urban_Commandos_(Earth-616)?oldid=5833879"
Community content is available under CC-BY-SA unless otherwise noted.