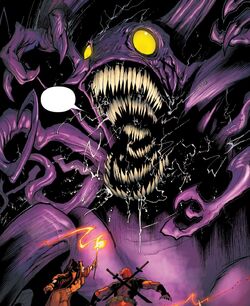 During monster hunting in Prague, Elsa Bloodstone confronted the Bone Beast Queen, who attempted to take over her body. Elsa ended up with getting her Bloodstone infected, causing her to slowly begin dying.

Later, Bloodstone convinced Deadpool to battle against Bone Beast Queen so her infection could be cured. They reached Greenland and entered the Bone Beast Dimension to kill the Queen.[1]

Like this? Let us know!
Retrieved from "https://marvel.fandom.com/wiki/Bone_Beast_Queen_(Earth-616)?oldid=6409636"
Community content is available under CC-BY-SA unless otherwise noted.