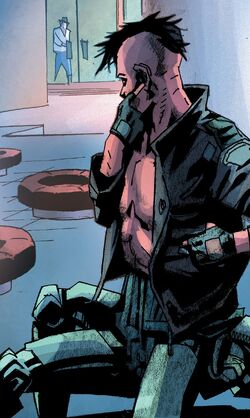 He joined Donald Pierce where he created a group of mechanic villains.[1]

During a Sentinels of the future attack in Australia sent by Trevor Fitzroy, Bone and a the other members of the Reavers all apparently died.[2] They later returned without explanation, though it was implied that they were somehow able to upload their minds into new bodies.[3]

Like many of the long standing members of the Reavers, Bonebreaker was believed to have been dispatched by Logan in a firefight orchestrated by Deathstrike.[4] He would soon be seen alive again and in the service of Donald Pierce as they went in search of the original Logan. They had been paid to harvest the body of Wolverine for a hefty sum, and the Reavers were in heavy disrepair due to a string of botched assignments.[5]

They would eventually fail this one as well, but with their initial prosecutors in Alpha Flight being unable to do anything about their crimes, Bonebreaker and his crew eventually ended up in the service of O.N.E. However, they were betrayed, their leaders taken captive, and the rest left for dead shortly after; himself included in the kill order.[6]

Bonebreaker was seen at the Criminal Technology Show Expo alongside several other supervillains.[7]

Bonebreaker possesses augmented strength and could morph his arms into cannons.

He is proficient in the use of a wide variety of conventional firearms, from pistols to automatic rifles.

Bonebreaker's chassis is outfitted with a vast array of weaponry, including anti-aircraft missile launchers and machine guns.

Motorized chassis propelled by tank treads in place of his legs

Like this? Let us know!
Retrieved from "https://marvel.fandom.com/wiki/Bonebreaker_(Earth-616)?oldid=5870761"
Community content is available under CC-BY-SA unless otherwise noted.