Book of the Vishanti 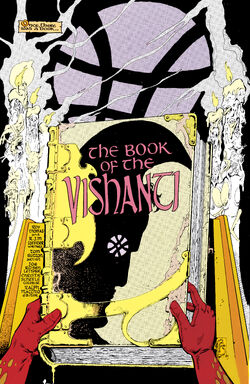 The Book of the Vishanti contains the most powerful white/order magic spells known, many of them being counterspells to other magic disciplines. It seems to have an endless number of pages, which seemingly materialise from nothing. The book itself can be used to deflect magic.[5] In addition, its spells can never be used for offense, only for defense.[6] The Book is marked with the Seal of the Vishanti. It also contains extensive knowledge introduced by several powerful magicians, such as the information collected by Agamotto regarding his discovery and mastery of the "Three Paths to Enlightenment",[7] and widely detailed information about the Marvel cosmology itself,[8] which was presumably dictated by the Vishanti to the first human authors.

Given the vast knowledge present in its pages, the book was presumably dictated by the Vishanti to the first practitioners of white magic, even though the original contents may have been written by Agamotto as the first Sorcerer Supreme. It was most likely written in Babylon several millenia before the 20th century.

It fell into hands of priests of Marduk, and they installed a griffin to guard it. The sorcerer Yao (sometimes known as the Ancient One) found the book and, by defeating the beast guardian, he became the destined possessor of the book following a prophecy "written in words of flame."[5]

Doctor Strange used the Book to cast the Spell of Tartashi to detect deception among the New Avengers, though this failed to detect Veranke, the Skrull posing as Jessica Drew.[10]

Retrieved from "https://marvel.fandom.com/wiki/Book_of_the_Vishanti?oldid=5781945"
Community content is available under CC-BY-SA unless otherwise noted.