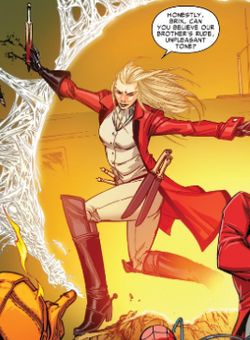 One of the family members of The Inheritors, she and her twin brother Brix seem to have a competition to see who can kill the most Spider-Totems. One day during their hunt, they came to a world inhabited by Cyborg Spider-Man. Superior Spider-Man and his team of Spider-Man counterparts were rescuing Cyborg Spider-Man from Karn, the outcast from the Inheritors. This led to the siblings fighting among themselves.

During a feast, she and her brother were asked by Solus what they think when they see the Master Weaver. She and Brix suggested it is like a sport, and they shall play and play until the end of time.

After Daemos was killed by Superior Spider-Man, Bora, Brix and a clone of Daemos battled the Spider-Army. After Silk, Spider-Woman and Spider-Man Noir tried to draw the Inheritors away from the Spider-Army, Bora and Brix went after them.[1]

When the Inheritors managed to gather three spider-totems needed to perform a ritual, The Other, The Scion, and The Bride, the Spider-Army formed to oppose the Inheritors travelled to their base, Loomworld, to stop them.[2]

In the end, the Spider-Army managed to overpower the Inheritors and stop the ritual which would've ended them all. The Inheritors were left in Earth-3145, a universe with a radioactive Earth, where they would die due to them being extremely vulnerable to radiation, and couldn't escape, because the Master Weaver they had enslaved and used to travel across the Multiverse had been killed. However, Spider-Man gave them the knowledge of a shelter in Sims Tower, where they could survive, but not pose a threat anymore.[3]

Bora possesses a variety of superhuman attributes as a result of Inheritors' unique physiology.

Life Force Energy Absorption: Bora's primary power is the ability to absorb the life force energy of other living creatures, thereby granting herself superhuman physical abilities. Even though Bora can absorb the energies of virtually any being, she must occasionally renew himself by feeding upon pure forms of animal-related superbeings from one of the four categories that make up her own, unusually pure, DNA such as animal, insect, human, and bird. Once Daemos has touched a human, she is able to sense that person's life force across great distances.

Radiation: Bora and the Inheritors are extremely sensitive to radiation.[5]

Like this? Let us know!
Retrieved from "https://marvel.fandom.com/wiki/Bora_(Earth-001)?oldid=5993608"
Community content is available under CC-BY-SA unless otherwise noted.