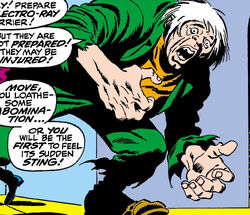 Shunned for his unpleasant features and mis-shapen form, Borgo was a miserable mess. When Ludwig von Frankenstein was willing to "allow" Borgo to serve him, he jumped at the chance. Borgo served his master faithfully. Even though he near constantly voiced his own conscience, he was never slow in obeying an order.

When his Master copied the Silver Surfer's powers into a clay creation and sent it to terrorize the village, Borgo informed the True Surfer of Frankenstein's plans. Once the Surfer saved the village from his clone, the villagers seized Castle Frankenstein. Seeing Frankenstein shooting at his own people and demanding more shells, Borgo had enough. He charged his master and tumbled out the window with him to the ground below.[1]

Borgo did not perish in the fall but was terribly hurt. Unable to walk, he was cared for by a local family, the Mullers. Eventually, he asked to live in the Castle, and Victoria von Frankenstein, his former master's daughter, feeling a family responsibility, allowed it. She was so eager to make amends for her father's crimes, that she let him use the X-Machine, which had created the synthetic Silver Surfer, to turn himself into a second Pseudo-Surfer.

Unfortunately, years of being crippled had turned his kindness into hatred, and he began to lash out at humanity, notably Doctor Strange. When the Master of the Mystic Arts ventured to his homeland, he realized that the X-Machine could potentially hold the secret of removing his powers, and attacked the castle.

Hearing the commotion in the castle, and worrying about Borgo, Herr Muller and his wife ventured to check on their friend. Seeing an all but defeated Doctor Strange on the road, they rushed to his aid, only to get between him and a cosmic blast, killing Mrs. Muller. Filled with regret for taking the life of the woman who had saved his, the FrankenSurfer hurled himself halfway through a mountain, the friction stripping away his silvery skin.

Doctor Strange extracted his body from the mountain, and the Mullers gave him a fitting burial.[2]

Like this? Let us know!
Retrieved from "https://marvel.fandom.com/wiki/Borgo_(Earth-616)?oldid=5325746"
Community content is available under CC-BY-SA unless otherwise noted.