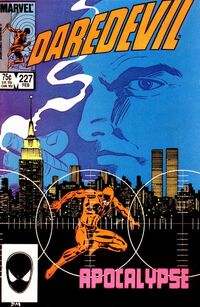 Karen Page, the former secretary of Nelson and Murdock, left New York City to pursue an acting career in Hollywood. However, her plans did not work out, and she became a star of pornographic movies and a heroin addict. Unable to take control of her life, she spirals deeper and deeper into an existence of hunger, need and desperation, until she finally sells Matt Murdock's secret identity for a shot of heroin.

This information eventually reaches the Kingpin, who proceeds to test it. Over the next six months, he uses his vast influence to hound Matt, causing his accounts to be frozen by the IRS, the bank to foreclose on his house and in general make Matt's life increasingly unbearable. He even manipulates police lieutenant Nick Manolis into testifying that he saw Matt pay a witness to perjure himself in a case. In the resulting trial, Matt manages to avoid a jail term, but he is barred from practicing law. The Kingpin skillfully ruins Matt's life piece by piece, but he cannot see Kingpin's handiwork – instead, he is convinced that he is simply unlucky and that there is no enemy for him to fight except for his increasingly desperate and violent attempts to investigate this situation.

But the Kingpin overreaches himself. He can't keep himself from delivering one more strike, and he has Matt's house bombed. This act of violence tells Matt that his problems were not random, isolated incidents but the work of a single mastermind.

Unfortunately, by now Matt has become unhinged. He has trouble differentiating between his fantasies and the real world. He has no money or home, and believes he has no friends. He even thinks that his former girlfriend Glorianna O'Breen and his best friend and business partner Foggy Nelson are a part of a complex, all-encompassing conspiracy against him.

Meanwhile, Matt's confidant, Ben Urich, reporter of the Daily Bugle is investigating his friend's plight and finds evidence of the Kingpin's involvement. Unfortunately, the Kingpin learns of this and has Urich's source killed and Urich's hand broken to intimidate him into silence. This cows Urich into keeping quiet and Murdock is left on his own.

Seeing no other course of action in his confused and paranoid state, he decides to attack the Kingpin and force him to return his life. On the way, he brutally assaults three would-be robbers in a subway train and then beats up a police officer who attempts to arrest him and takes the officer's nightstick. In his weakened and confused state, he is allowed to enter the Kingpin's office and quickly beaten by the crime lord. The badly hurt and unconscious Matt is drenched in whiskey, strapped into a taxi cab, whose owner is beaten to death with the billy club Murdock stole from the cop, and finally, the taxi is pushed off a pier into the East River. When the car is eventually found, Matt's reputation will suffer the final blow. The Kingpin revels in the knowledge that he has completely disgraced, destroyed and murdered the only good man he ever knew.

But when the taxi is finally found, there is no corpse. Instead of drowning, Matt managed to smash the windshield and, in a supreme show of will, cut the safety belt with one of the fragments and swam to safety.

Badly injured, Matt stumbles through New York's Hell's Kitchen by sheer will power alone, and, though injured, forces himself to keep walking just to keep from passing out. As he shambles aimlessly across the city, he is stabbed by a thug in an alley and even hit by a car. He eventually ends up being rescued by his mother, who, having not been in Matt's life for decades, has become a nun at a local church. She nurses him back to health. At the same time, Karen Page – now hunted by Kingpin's men as part of Kingpin's orders to kill anyone who possessed knowledge of Matt's secret identity – arrives to New York with an abusive drug dealer named Paulo Scorcese, intent on finding Matt. She's unable to locate him, but meets up with Foggy Nelson, who takes her to his home in an effort to protect him from Paulo. Meanwhile, Urich manages to regain his courage and comes forward with his investigation, alerting his paper and the authorities of the situation.

In the meantime, the Kingpin becomes increasingly obsessed with finding Matt and silencing Urich. He first arranges for the nurse who murdered Urich's source to kill the reporter himself and he also arranges for a violent mental patient to be released from an asylum, dress up as Daredevil and kill both Nelson and Page in an effort to provoke Matt into resurfacing. However, Matt intervenes in both plots, defeats the nurse and the patient, takes the latter's costume and proceeds to save Page from both Scorcese and another hit-man sent by the Kingpin. The two are reunited and Matt comforts Karen with the fact that he has moved beyond regretting losing his material possessions.

In a major misstep, the Kingpin uses his connections in the military to procure America's super soldier, Nuke, whom he sends to assault Hell's Kitchen. In a climactic battle, dozens of civilians die while Matt responds as Daredevil for the first time since the destruction of his home. Nuke uses heavy weaponry against Daredevil, who is plagued with not only with the challenge of fighting an inhumanly formidable opponent, but the awareness through his enhanced senses of the casualties caused every time Nuke's weapons are fired. In the end, Daredevil defeats Nuke and, in an uncharacteristic move to stop the slaughter, uses Nuke's weapon to destroy an assault helicopter that supported Nuke and further threatened civilians, thereby killing the pilot. The Avengers arrive at the scene and take Nuke into custody.

Captain America, however, is not pleased with the situation. Although the authorities claim that Nuke is a terrorist, the Captain is not convinced, especially after a discussion with Matt, who told him that the assailant's body was heavily enhanced. As America's original super soldier, he is appalled to find that the country's latest super soldier appears to be a violent, musclebound and insane man with little regard for the lives of civilians. Unsatisfied with the evasive answers given to him by Nuke's superiors, he breaks into the base's computer files to discover more about Nuke. He turns out to be the only surviving test subject of a severely flawed attempt to recreate Project: Rebirth, the same project that originally enhanced his own body.

Enraged by the treatment he received in the media, Nuke breaks free from custody in the same base and runs amok in an attempt to attack the offices of the Daily Bugle. He's stopped by the Captain, but nonetheless, the military attempts to kill him, as do the Kingpin's men; however, though mortally wounded, Nuke does not die immediately. Daredevil first attempts to get him to a hospital, but realizing that Nuke will not survive, he then decides to get him to the Bugle instead in an effort to prove that Nuke is a government operative and that his presence in New York is the product of the Kingpin's widespread influence in the military.

In the end, the Kingpin's public image as an honest and respectable businessman and pillar of community is shattered, although he manages to avoid imprisonment while he plans for his revenge on Matt. For his part, Matt accepts and enjoys a new, different but apparently fulfilling life in Hell's Kitchen with Karen Page and expresses no regret over the loss of his previous lifestyle as a successful lawyer.

The next two comics are not officially part of the storyline, but are still considered part of it because they continue the same story:

The first issue of this storyline was voted 11th greatest Marvel Comic of all time by the fans in 2001.

The nightstick which Fisk had the cabbie beaten with makes a brief reappearance in a later story. In Daredevil #300, the climax of "The Fall Of The Kingpin" story, the tables have turned for Fisk - Matt is now the one systematically destroying Fisk's business and image, while Fisk struggles to hold on to whatever he has left. As an act of desperation, he goes to the New York Port Authority Terminal, where he had the nightstick - complete with the blood stains of the cabbie and Matt's fingerprints - stashed away. In a flashback to the scene where Matt is in the cab being pushed into the river, Fisk claims that it's good to hold on to such incriminating evidence, as someone might want to resurrect Matt"s fallen image.

Daredevil tracks Fisk to the terminal. Fisk, seeing Daredevil behind him, loses his composure and smashes his way through protective glass to retrieve the nightstick. He then flees through the terminal in a chase photographed by Peter Parker, who is confident enough that his friend has the situation well enough in hand to not interfere. Daredevil follows Kingpin to a nearby lot where some homeless are warming themselves over a fire they started in a barrel. Daredevil manages to wrest the nightstick away from Kingpin and toss it into the fire, causing any incriminating evidence that Kingpin might have used against Murdock to be destroyed.

In an ironic twist, the story ends with Kingpin confronted with a low-level mob contact who feels the time is ripe to take Fisk for whatever he's worth left - including having Fisk retrieve his laundry for him. Fisk, enraged, smashes the man's skull in with his cane, walking off with a renewed sense of purpose. Much like Matt, he intends to fight his way back from insanity and homelessness through sheer willpower. Meanwhile, Matt is readmitted to the bar and resolves to continue his protection of the innocent as Daredevil.

Retrieved from "https://marvel.fandom.com/wiki/Born_Again?oldid=5281759"
Community content is available under CC-BY-SA unless otherwise noted.