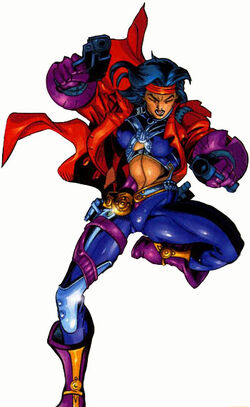 Bounty is a renowned extradimensional bounty hunter. She claimed never fail to track her targets, to have been romanced by pirates, gladiators and emperors, and to have killed a personification of Death.[1]

On several occasions Bounty had run-ins with superheroes, including the Fantastic Four and Spider-Man. She displayed signs of incredible strength, a heightened sense of smell, a knowledge of how to use many different weapons and a very high biological resistance for Earth's alcohol.[citation needed]

In the past (on Earth), she damaged the Fantastic Four's headquarters, had romantic feelings for the Thing, was formally associated with The Bacchae, fought against Spider-Man, and interfered with a "gang" dispute between The Golden Horde and The Bacchae.[2] Bounty helped the Fantastic Four defeat Pluto.[citation needed]

While being known as a great fighter with something of a temper, she also shows her feminine side when dealing with people she feels she can open up to or get what she wants from them.[citation needed]

After the Civil War, she was listed as a potential recruit for the Initiative.[3]

Bounty gradually grew from 5'10" to 7',[citation needed] though whether she controlled this is unknown.

Bounty is an expert fighter, pilot, and weapons master. She is familiar with extradimensional races and technologies.[citation needed]

Like this? Let us know!
Retrieved from "https://marvel.fandom.com/wiki/Bounty_(Humanoid)_(Earth-616)?oldid=6105631"
Community content is available under CC-BY-SA unless otherwise noted.