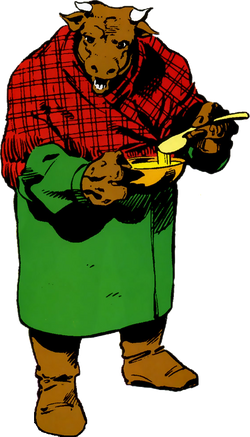 Bova is an evolved cow created by the rogue scientist the High Evolutionary as one of his New Men, animals given humanoid form and high intelligence. As one of his first creations, her purpose was to serve as nursemaid and caretaker to her fellow New Men, including his high guard, the Knights of Wundagore.[1]

When the pregnant Magda Lehnsherr arrived at the Evolutionary's citadel after fleeing from her husband, Bova served as midwife for the birth of her children, Pietro and Wanda.[2] Fearing her husband may find her, Magda secretly left the castle a short time later, leaving her children behind. Soon afterward, Bova would again serve as midwife to the World War II-era hero Miss America, whose child was born stillborn. Attempting to soften their grief, Bova offered to give her and her husband, The Whizzer, Magda's abandoned twins, whom they declined.[3] The children were eventually given to a gypsy couple, the Maximoffs, who lived down the mountain.

Bova was one of the few New Men who stayed behind after her creator left for outer space to continue his research, and she began living in a cottage at the base of her mountain home. There, she had a chance encounter with the children she helped bring into the world, now known as the Avengers Quicksilver and Scarlet Witch, who had traveled to Transia to battle the dark magician Modred.[5] After severing his bond with the elder god Chthon, Modred reverted to a child-like mental state and was placed in Bova's care.[6]

Some time later, Bova was approached by Magneto disguised as a traveler seeking shelter. Goading her for information on his wife and children, he used his powers to send blood to her brain, giving her a stroke which left her paralyzed and Modred to wander off.[7] Quicksilver then took Bova to the Inhuman homeworld of Attilan to heal her, where she made a full recovery.[8]

Bova became friends with a shepard named Fydor who looked after her when she fell ill from a mysterious ailment.[9] When the Evolutionary finally returned to Earth, Quicksilver and his wife Crystal took him to be by her side. They learned that Fydor had been infected by a sentient mutant virus named Rakkus, who influenced him to poison Bova over a long period and draw the Evolutionary out.[10] After destroying her cottage, Rakkus was defeated and Bova returned to live with her creator.[11]

When the Acolytes attacked and took control of the Evolutionary's citadel, Bova and several Knights fled to New York while their master recovered in a safe location.[12] Looking after Quicksilver's daughter Luna, Bova later joined the rest of the Knights in re-taking the citadel and defeating the combined forces of the Acolytes and the Man-Beast.[13]

When Modred returned to Wundagore Mountain seeking to revive his master Chthon, he slayed all the Knights present in the caves beneath except for Bova, whom he forced to hold the tome of Darkhold while he recited his incantations.[14] After learning Quicksilver's soul was trapped in the book, Bova distracted Modred enough for the Mighty Avengers to stop him and his master, returning Quicksilver back to normal.[15]

Bova and the rest of the New Men were killed by the High Evolutionary, as he stated they were never meant to be.[16]

Bova's bovine physiology gives her a very slight degree of enhanced strength, as well as a dense frame, a pair of solid horns on her head, and a ruminant digestive system.

Bova is adept at nursing (including childbirth), childcare, and cooking.

Despite having minimal combat training, Bova is said to be able to lift roughly twice her own body weight.

Like this? Let us know!
Retrieved from "https://marvel.fandom.com/wiki/Bova_Ayrshire_(Earth-616)?oldid=6127059"
Community content is available under CC-BY-SA unless otherwise noted.