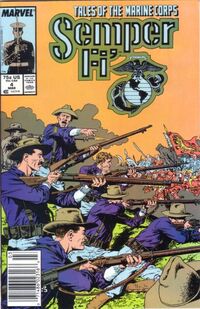 The Boxer Rebellion (拳亂) was a anti-colonial uprising that took place in China from 1899 and 1901, toward the end of the Qing dynasty. It was initiated by the Yihequan, nicknamed the "Boxers", as they were known for their martial arts skills. They were motivated by proto-nationalist sentiments and opposition to Western colonialism and associated Christian missionary activity.[1]

Deadpool went into the past allegedly to cause the ascension of United States. He arrived in the 1900's during the Boxer Rebellion. He began a relationship with the Dowager Empress Cixi. He hid his backup portable time machine located under China's throne. He eventually sneaked away, stating he had to use the bathroom. He later returned, knocked her out and used his time machine to continue his mission.[2]