Marvel Database
Register
Don't have an account?
Sign In
Advertisement
in: Characters, Villains for Hire (Earth-616)/Members, Male Characters,
and 19 more

Transformed into a demonic entity by the fear gasses he developed for Mr. Fear.

A small-time drug dealer turned chemist tasked with fear gasses for Mr. Fear (along with various designer drugs and special chemical compounds for other villains).

When the Hammer of Angrir landed in Yancy Street and was picked up by Ben Grimm (the Thing), the explosive energies that were released by the transformation caused Briedel's lab to cave in on him, crushing him, slicing him with shrapnel and bathing him in the chemicals and compounds he worked with.

No longer afraid of death, he prepared to succumb, only to suddenly find the strength to rise, emerging from the rubble as a blackened, demonic creature emanating green flames.[1] 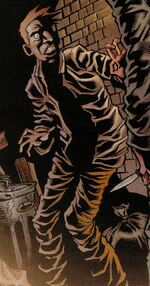 Following the departure of Angrir, Paladin and Gargoyle began searching the rubble for survivors. Finding several scared of something in the rubble, the duo investigated, where Christians was met with a shining vision.

His screams for forgiveness for choosing to "embrace darkness" allowed Paladin to find him, turned to stone, amidst the smoke and settling dust. Paladin then found himself confronted by a "better" version of himself, who swiftly beat him unconscious. Briedel then revealed himself, standing over the defeated pair.[2]

Attacking rescuers and those they sought to rescue, Briedel took pride in his new abilities, dubbing himself "Monster." When Misty Knight arrived, seeking Paladin and Gargoyle, he confronted her, only to find that her greatest fear was the child she'd lost. Becoming a frightened child, Briedel fled.[3]

Hired by Purple Man, Briedel joined his Villains for Hire team. Deployed against Misty Knight's rival team, he faced Crossfire, transforming into Crossfire's greatest fear: Hawkeye.[4] Monster was later part of the Villains for Hire assault on Misty Knight's headquarters, though he was quickly taken out by one of the many traps Knight employed.[5]

Empathic Shapeshifting: Able to take on the form of a person's greatest fear, gaining certain abilities in the process, such as heightened fighting ability when in the form of Paladin's fear of not being better, simply a better version of himself.