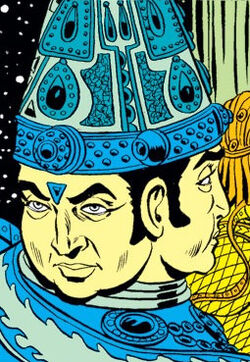 Brahma is a member of the Daevas, an extra-dimensional race of beings still worshiped as gods by the Hindu people.[1] As part of the divine Trimurti with Vishnu and Shiva, Brahma arbitrates to keep the balance between creation and destruction.[3]

As one of the Daevas, Brahma is immune to aging and resistant to disease and injury. Nothing short of total molecular discorporation could be guaranteed to overcome Brahma's durability and healing powers. The average Daevas has flesh three times denser than mortal beings and can lift 40 tons but Brahma, as one of the Trimurti, can lift far greater amounts of weight.[2]

Like this? Let us know!
Retrieved from "https://marvel.fandom.com/wiki/Brahma_(Earth-616)?oldid=5274531"
Community content is available under CC-BY-SA unless otherwise noted.