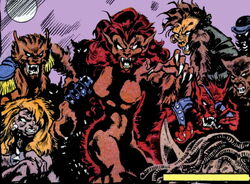 The Braineaters were a biker gang of Werewolves. One sect was operating on the West Coast, where it was responsible for a slaughter in Los Angeles. Jack Russell encountered them, who took him under their wing. He began to enjoy his wild side, until he witnessed them murder innocents at a drive-in theater. Russell attacked the Braineaters, leading to a gas leak explosion. Wounded he retreated and was later found by the Braineaters, and a battle ensued. Soon the werewolf hunting group, the Sword of the Lord, arrived and attacked the werewolves. Each side fought to the bitter end till only Jack Russell remained.[1]

Another set of the Braineaters which was on a cross-country murdering spree encountered both the Ghost Rider and Jack Russell in NY City, where the gang was taking its victims to Central Park in a murderous ritual. After several clashes, the gang was finally defeated when the Ghost Rider fired silver bullets from his chain at the Braineaters. As they were hit while in their human form, they discovered they would die if they turned back into their werewolf forms, when one of their members did so.[2]

Retrieved from "https://marvel.fandom.com/wiki/Braineaters_(Earth-616)?oldid=5545349"
Community content is available under CC-BY-SA unless otherwise noted.