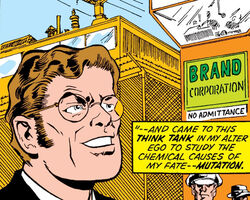 Initially Brand was a completely-owned subsidiary of Roxxon Oil.[1]

Hank McCoy was hired as a researcher for the Brand Corporation, besides Carl Maddicks and Linda Donaldson. Maddicks and Donaldson attempted to steal McCoy's research, but they failed, and McCoy drank a serum of his own creation that transformed him into a furry beast.[2]

Tony Stark and his assistant Marianne Rodgers toured the facility. Stark came across the Beast as Iron Man, until they were engaged by members of Brand security.[3]

Like this? Let us know!
Retrieved from "https://marvel.fandom.com/wiki/Brand_Corporation_(Earth-616)?oldid=5580107"
Community content is available under CC-BY-SA unless otherwise noted.