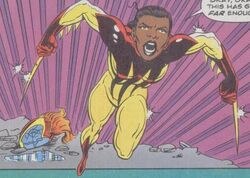 Breeze was a reporter who was hired by the Mys-Tech corporation to infiltrate the ranks of the Knights of Pendragon, but eventually sided with the heroes after being granted the Pendragon spirit of Guinevere, which had once possessed Kate McClellan, by the Green Knight. She was one of only four Pendragons to remain with the team after the others went their separate ways, though her current whereabouts are unknown.[citation needed]

Given her superhuman speed, it is possible Breeze has superhuman strength, in her legs at least.

Like the other Knights, Breeze wears a suit of armor that enhances her abilities, detects certain forms of danger, plans strategy and has built-in weapons systems.

Like this? Let us know!
Retrieved from "https://marvel.fandom.com/wiki/Breeze_James_(Earth-616)?oldid=5874598"
Community content is available under CC-BY-SA unless otherwise noted.