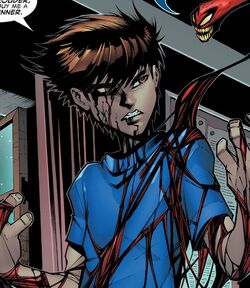 Bren Waters was a teenage boy that had bonded to the Toxin symbiote. On one of their first outings following Knull's invasion of Earth, Bren picked a fight with a Brood/human hybrid created by Alchemax's unethical experiments, and was attacked by a Guardsman who believed that Toxin had been part of the symbiote invasion. Escaping, Bren returned home and bickered with Toxin until Bren's father returned home from work, revealed to be the Guardsman who Toxin had fought earlier.[1]

Seemingly those provided by the Toxin symbiote including:

Like this? Let us know!
Retrieved from "https://marvel.fandom.com/wiki/Bren_Waters_(Earth-616)?oldid=6500551"
Community content is available under CC-BY-SA unless otherwise noted.