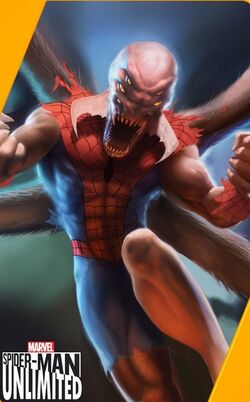 I've sat by long enough while the Sinister Six have terrorized this dimension! I may have no love for Spider-Man, but I have to stop them!

Brain had a similar history to his Earth-616 counterpart. After the Inheritors were expelled from Earth-TRN461, Spider-X decided to join the Spider-Men to defeat the Sinister Six.

After being exposed to hallucinogenic gas, Kornfield joined the Spider-Spawn and helped Jack O'Lantern terrorize Manhattan. He was found by the other Spider-Men and freed by the gas.

Spider-X was manipulated by Spider-Demon to succumb to his cannibalistic impulses and convinced to join his criminal organization, The Three. They were defeated by Spider and his allies.[1]

Seemingly those of the Brain Kornfield of Earth-616

Like this? Let us know!
Retrieved from "https://marvel.fandom.com/wiki/Brian_Kornfield_(Earth-TRN461)?oldid=6106933"
Community content is available under CC-BY-SA unless otherwise noted.