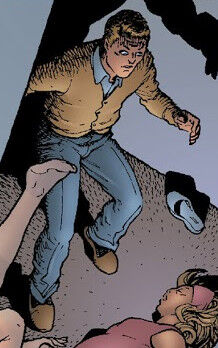 Dr. Brian Xavier was a wealthy nuclear scientist and husband to Sharon Xavier. In 1946, Dr. Xavier was a colleague of Dr. Alexander Ryking and Dr. Kurt Marko at Project: Black Womb, a secret government project headed by Amanda Mueller and aided by Dr. Nathan Milbury (secretly the evil geneticist Mr. Sinister), which studied, but did not alter, thousands of children, mostly mutants, in post-natal holding tanks. Although a colleague, whether Dr. Xavier was involved with Project: Black Womb remains unclear. Dr. Xavier and Sharon had a son, Charles Xavier, a stillborn Cassandra Nova, and Dr. Xavier later died in an accident explosion at a nuclear facility.[1][2][3]

Dr. Xavier's son would become a professor and use the considerable amount of inheritance and the family estate to found the X-Men, a group of young mutants taught to use their powers for the benefit of mankind and fighting for the peaceful co-existence of the two races.[4]

Like this? Let us know!
Retrieved from "https://marvel.fandom.com/wiki/Brian_Xavier_(Earth-616)?oldid=6190748"
Community content is available under CC-BY-SA unless otherwise noted.