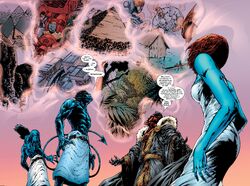 The Brimstone Dimension was an alternate realm which was located in a dimensional rift with a tear was situated in Islas de Demonas. It was connected to all points on Earth along with a few others. Knowledge of its existence was known to the race of Mutants known as the Cheyarafim who were battling the demonic Neyaphem.[1]

During the height of the conflict, the Cheyarafirm banished their foes by sending them past the portal in Islas de Demonas where they were trapped in a timeless prison. During their imprisonment, Azazel led his followers in creating Azazel's Castle that served as their home whilst they plotted their freedom. In order to free themselves, Azazel planned to breed mutant teleporters that were able to pass into the Brimstone Dimension during their teleportation. Among these included Nightcrawler, Abyss and Kiwi Black all of whom used this realm during the use of their abilities.[1]

The planned mission for Azazel's children came to pass with the likes of Nigthcrawler and others converging at Islas des Demonas who were controlled through their father's genetic connection. Thus, the teleporters began their ritual creating a rift into the Brimstone Dimension but the process was disrupted by the arrival of the X-Men with all of them being shunted into that alternate realm.[2]

It was revealed that Nightcrawler teleported by travelling through another dimension after Forge created a device that would allow him to travel even further than normal. This device allowed Nightcrawler to stay longer in the other dimension which was a red hellish realm filled with fire and low gravity. Whilst not named, it was stated that the atmosphere was the source of the sulphur smell when Nightcrawler teleports and thus indicated a toxic atmosphere. In addition, it was populated by two-legged raptor-like reptilian animals. During the test run of the device, Nightcrawler inadvertently created rifts through which the inhabitants of the Brimstone Dimension enter into Earth until they were forced back by the X-Men.[3]

Like this? Let us know!
Retrieved from "https://marvel.fandom.com/wiki/Brimstone_Dimension?oldid=5145057"
Community content is available under CC-BY-SA unless otherwise noted.