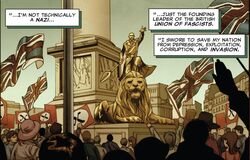 The British Union of Fascists was a political party founded and led by Charles Xavier, who intended to protect the United Kingdom from depression, exploitation, corruption and invasion.

To achieve his vision, he managed to ascend as the leader of his country, and formed alliances with others authoritarian leaders, the Italian Fascist Mussolini, the Imperial Japan military leader Tojo, the Nazi Hitler and the Soviet Joseph Stalin.

The Axis gathered, they defeated the Allies, destroying the White House of Washington, D.C. and killing Captain America.

That done, Xavier terminate his former allies and ascends as the leader of the "free people of the world". During his march on Paris, acclaimed by the Parisians, he witnessed the drowning of the surface by Atlantis.

Xavier was seemingly the unique survivor of the BUF. He managed to save a few hundreds humans, including "Aryans" and coloured slaves, and destroy Atlantis.

For ten years, he hide in the HMS Albion, experimenting his powers on Atlanteans-humans hybrids in order to defeat Namor Miyamoto, last remains of both Imperial Japan and Great Atlantis, who tracked him after having seen him annihilate his underwater nation.

In the end, the multiversal X-Men came to Earth-13410, and found the evil Xavier, unwillingly discovering him to Namor's senses, who came to avenge both Japan and Atlantis. After a confused tripartite fight, Xavier was finally slain by Dazzler and Namor's efforts.[1]

Like this? Let us know!
Retrieved from "https://marvel.fandom.com/wiki/British_Union_of_Fascists_(Earth-13410)?oldid=5545373"
Community content is available under CC-BY-SA unless otherwise noted.