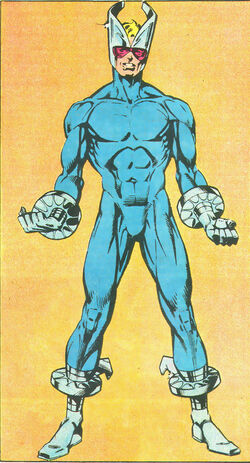 Brock Jones, a former professional football player, donned the Torpedo Armor at the request of a dying Michael Stivak, the former Torpedo, and eventually used its technology for good. He clashed with Daredevil who was pursuing the original Torpedo and in the aftermath of their battle, decided to retire from super-heroics.[1] His life as an insurance salesman didn't satisfy him, however, and he picked up the mantle once more, teaming up with Daredevil to take down the Chameleon.[2]

Jones was one of a group of adventurers who temporarily joined the Defenders for a single day, but left the team along with most of the other new recruits at the end of that day.[3]

Jones later moved to Clairton, West Virginia. There, he met ROM: Spaceknight and they battled the Rocketeers, who were Dire Wraiths in disguise. After learning of the Earth's infestation by the Dire Wraiths Brock Jones becomes friends with ROM and protects Clairton in the Spaceknights absence.

Jones was later killed in battle with the Dire Wraiths.[4]

Like this? Let us know!
Retrieved from "https://marvel.fandom.com/wiki/Brock_Jones_(Earth-616)?oldid=5559450"
Community content is available under CC-BY-SA unless otherwise noted.