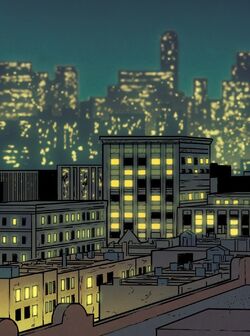 The Bronx is one of the five boroughs of New York City. Parts of the Bronx were annexed by the city in 1874 and the rest in 1895, it is the northernmost borough of NYC and the fourth largest. A largely residential area rife with slums and urban decay mainly in the southeast and estates along the Hudson River, the Bronx is the only portion of New York on the mainland.

Public housing projects nestled among the piles of rubble and ruins are common sights in the Bronx. Many buildings are half demolished and stand in urban ruins, or vacant in this primarily Hispanic (Puerto Rican) area. The second-largest minority here are African Americans which make up 37% of the total population. Distinct Italian neighborhoods are also found in the area and Asians make up a small percentage of the population.

Industrial areas are few in the Bronx and concentrated in the southernmost portion. They are chiefly made up of manufacturing plants such as food processing and garment assembly. Along the waterfront, shipping facilities, warehouses, and the largest produce market on the East coast are the mainstays of the landscape.

When Black Bolt confronted Thanos in hopes of preventing the Mad Titan's invasion of Earth in the search of his son, he unleashed a powerful attack that triggered a Terrigen Bomb and destroyed Attilan in the process.[1] The resultant Terrigen Cloud released in New York City struck the Bronx and transformed Humans of Inhuman descent including Lineage.[2]

In Earth-138, the Universal Church of Truth attempted to take over The Bronx, but were defeated by Spider-Men Hobie Brown and Miles Morales.[3]

Like this? Let us know!
Retrieved from "https://marvel.fandom.com/wiki/Bronx?oldid=5784579"
Community content is available under CC-BY-SA unless otherwise noted.