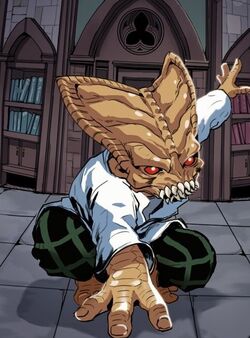 Broodling, Son of Brood. 22.3% chance that in the next three years you will discover a cure for cancer. 34.7% chance that during that time you will murder and consume at least four of your classmates.

Broo is a mutant of the Brood race, born in the lab on the orbital research station known as Pandora's Box, where S.W.O.R.D. studied his race. Like No-Name of Hulk's Warbound, he understands compassion and friendship, which disgusts the other members of his race. When the Brood Queen escaped and freed her warriors, they left him in his stasis tube. Usually, this kind of Brood is killed at birth, but the Brood population was so low that the Brood-Queen opted to spare him instead.[4]

As the Brood seized the station, Beast, Lockheed and the X-Men went there to rescue Abigail Brand. However, during the battle Abigail was infected by Brood larva, which gave her access to the hive-mind. She learned that the destruction of the Brood home world led to the near-extinction of the race, causing an imbalance in the interstellar ecosystem. The X-Men then decided to develop a plan to save the Brood, but didn't endanger humankind in the process. They planned to "reprogram" the hive-mind, using No-Name as a new template, but Brand told them about this unnamed teen mutant, who could be used for the same purpose. The X-Men freed him and he helped them defeat the Brood.[5][4][6]

After this he returned to Earth and joined Wolverine's X-Men at Jean Grey School for Higher Learning.[7] When the school was attacked by the Hellfire Club and Krakoa, he met Idie, who he found had never before felt feelings before, who gave him the name Broo. [8] When the inspectors of the education departments turned into monsters, he tried talking to them in the hopes that they would regain their senses. They attacked him, but Quentin Quire stepped in and telepathically turned the monsters against each other.[9]

When Genesis was enrolled in the school, everyone noticed that he looked like Apocalypse except Broo (who had never seen or heard of Apocalypse). He welcomed him. In a special lecture, Deathlok gave the students the probabilities of their futures. He told Broo that there was a 22.3% chance that in the next three years he would discover a cure for cancer, and a 34.7% chance that during that time he would murder and consume at least four of his classmates. He responded by saying "Well, that is rather... fascinating."[3]

During the Avengers vs. X-Men conflict ending, Broo assisted Iron Man and Beast in the search of a way to defeat the Phoenix.[10]

Not long after, during the Jean Grey School dance, he followed Idie to a church, where he encountered the priest. After a brief talk about Idie that angered him, Broo's feral side took over and he decapitated the priest, only to discover that he was a robot placed there by the Hellfire Club in order to make Idie leave the school and join the Hellfire Academy. Kade Kilgore and Max Frankenstein soon showed up and told Broo about their plans, but he is shot and left for dead before he can tell anyone else. His apparent death and the shut down of his Cerebra signal was first unseen, covered by the bloom of new mutants caused by the Phoenix.[11][12]

He was later found in the church and immediately treated. Beast performed micro-surgery in his cranium, assisted by Brand, and contacted Peter Parker, Reed Richards and Tony Stark, without results as the Brood biology wasn't well understood.[13]

Eventually, Broo woke up from his coma, but in a brain-damaged state, rendering him a feral beast similar to a regular Brood.[14] As Beast failed to revert him to his normal state, he asked Wolverine to take him along for his Savage Land field-trip.[15]

Idie left him at the school to join the Hellfire Academy, having discovered that the Hellfire Club were responsible for him being shot and wanted to avenge him, due to possibly being in love with him.[16] Soon after, Beast brought Broo to the Peak VII, to consult the biologist/murderer Dr. Xanto Starblood, the foremost known Brood physiologist expert. However, Starblood declared that Broo was a perfect specimen, and would not help to restore his previous personality. Immediately, Starblood spoke Brood in order to agitate Broo, and Hellfire Club's Philistine teleported into the space station.

After a brief fire-exchange with S.W.O.R.D. agents, Starblood and Broo were extracted by the Philistine, who teleported back to Earth then took Husk and went with her and his two guests to welcome Toad and Quentin Quire into the Hellfire Academy.[17] While at the Hellfire Academy, Idie confirmed that Broo had been shot by Kade Kilgore, the Black King of the Hellfire Club.[18]

When Wolverine and the X-Men finally discovered the location of the Hellfire Academy, a battled ensued between the school's faculty and the X-Men. During the fight Xanto Starblood took Broo aboard his spaceship and attempted to flee. While on the ship Broo saw a Bamf and bit it. Broo then attacked Xanto, which caused the ship to crash. After the fight Broo returned to the Jean Grey School, where he was examined by Beast, who discovered that Broo had regained his intelligence after biting the Bamf.[19] Broo babysat Jubilee's adoptive son Shogo Lee for a time.[20]

When the Jean Grey School moved to the middle of Central Park and was rebranded as the Xavier Institute for Mutant Education and Outreach, Broo returned as a trusted student.[21]

Later, he left the X-Men, and joined the Agents of Wakanda.[22]

He was seen standing near to Skin and Wolverine at the party on Krakoa following the first meeting of the Quiet Council.[23]

After the New Mutants brought the Kree's King Egg to Krakoa, this caused entire armadas of Brood to go to Earth and retrieve the artifact.[24] Broo, alongside the X-Men and the Shi'ar Empire's Imperial Guard, tried to fend off the Brood to no avail, until Broo accidentally ate the King Egg which caused Broo to become the new King of the Brood.[1]

Compassion: Broo is a mutant of his race, because he can feel compassion and friendship. More specifically, he was born separate from the Brood Hive-mind mentality and intuitive devotion to the Brood Queen. Without the innate drive to serve felt by other Brood, Broo developed the ability to make his own decisions.[6]

Brood Physiology: Broo presumably possesses all the traditional physical capabilities of a Brood, as his mutation was reportedly only a mental difference. However, because the Brood are a parasitic race who adapt the characteristics and traits of their host organisms, "traditional" Brood physiology varies. Broo appears significantly more bi-pedal than other Brood,[7] even those born from previous bipeds.[26] He has yet to demonstrate the tail, stingers, or wings Brood usually possess.

Super-Genius Intelligence: Broo is one of the smartest students at the school, potentially matching with Tony Stark.[10] His intelligence had vanished for a time because of his injury.[19]

Brood Instincts: Thanks to his X-Gene, Brood is able to suppress his natural Brood instincts to kill and consume, but they are always there. When he lost his intelligence, his instincts returned, causing him to attack his friends and classmates. His intelligence returned following his bite of a Bamf.[19][verification needed]

Like this? Let us know!
Retrieved from "https://marvel.fandom.com/wiki/Broo_(Earth-616)?oldid=6472050"
Community content is available under CC-BY-SA unless otherwise noted.